The gang is back in St. Thomas. This was the first island we stopped at when we were on the Disney Fantasy and you never forget your first. Right? Well it was good to be back and this time we decided to do a speed boat ride that took us on a short tour of the harbor area. So of course we woke up fairly early, 7am, and started to get our things together, get dressed and go and eat a quick breakfast. If I remember right (memory is starting to get fuzzy now that it has been so long ago), we had met up with a few of the Auger children at the buffet and we all were done quickly and went back to our rooms. We met our guide who was holding a sign just outside the ship, near the gangway. They walk us over to the dock where I believe we loaded up for our excursion the last time we were there, and boarded the speed boat.

It was a lot of fun and if you want to see what it is all about, check out the video link below….when I finish it….SORRY. After watching the video as I’m loading it up here, I’m remembering how much fun it was and how much the kids loved it. The only bad thing is the excursion is REALLY short. We knew that going in but you know, you still wish it was longer anyway.

Everyone got soaked. A good tip is to have the kids bring their swimming goggles with. That was a smart thing we had our kids do so they didn’t worry about getting salt water in their eyes.  The kids all loved the speed boat. We didn’t have to worry about kids being scared to put their head in the water like last time. Chris and I started wondering how we could make our own money living on St. Thomas and giving wave runner rides. Maybe not quite as exciting?

We were done by 11:30 so we had time to kill.  We asked the guys running the tour if there were any shops we could walk to other than the ones right by pier. He pointed and said about a mile walk there were shops. So we went back to change into dry clothes, grab a quick bite to eat, and start walking towards the shops.

It was a bit of a walk and a lot of the shops we saw were jewelry or high end clothing. We were looking for more touristy stuff which we could have just bought at the shops by the ship but we wanted to explore the area more. We were also hoping to maybe find a nice place to sit and have a drink or a little bite to eat and relax close to the water but the only thing we found was a hidden ice cream shop. It was very welcomed because everyone was getting warm and thirsty.  As we were sitting eating our ice cream, some local came over to Kaitlyn and offered to buy her white Crocs. He thought they were great. I think he started off by offering $25 for them and eventually went up to $100. Of course we said no because there obviously was something off with this. We’ve seen Crocs on the island before so they are nothing new. Not sure if he was going to grab them and run or hand us fake money. Part of us wanted to do the deal because….who cares, they were an old pair of Crocs, and we wanted to see where the catch was. But Kaitlyn didn’t have any other shoes with and we didn’t want to deal with any angle we may not have thought of so we said no.

So we make our way back and hang out on the ship the remainder of the afternoon.

We Take Some Pictures 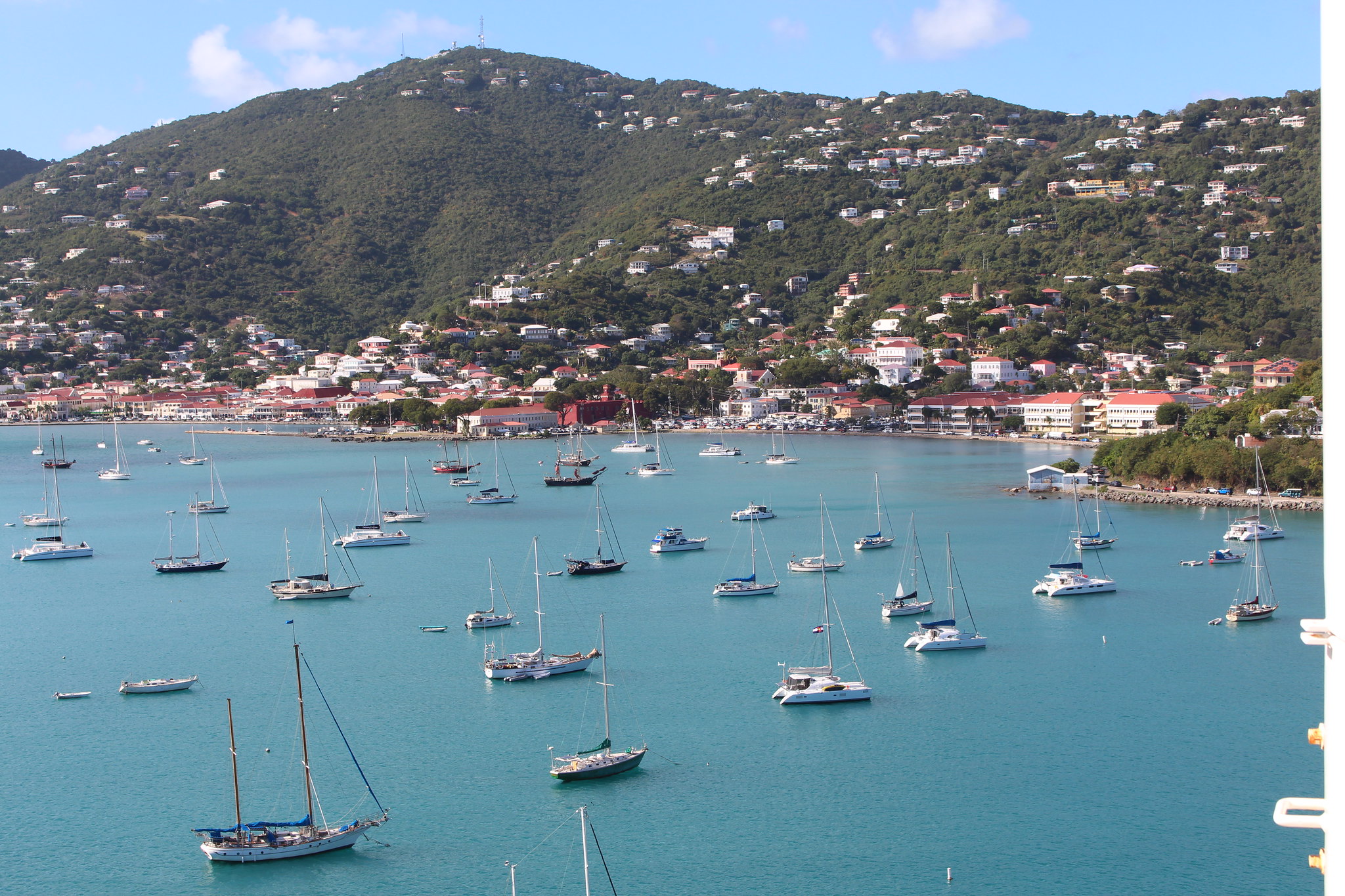 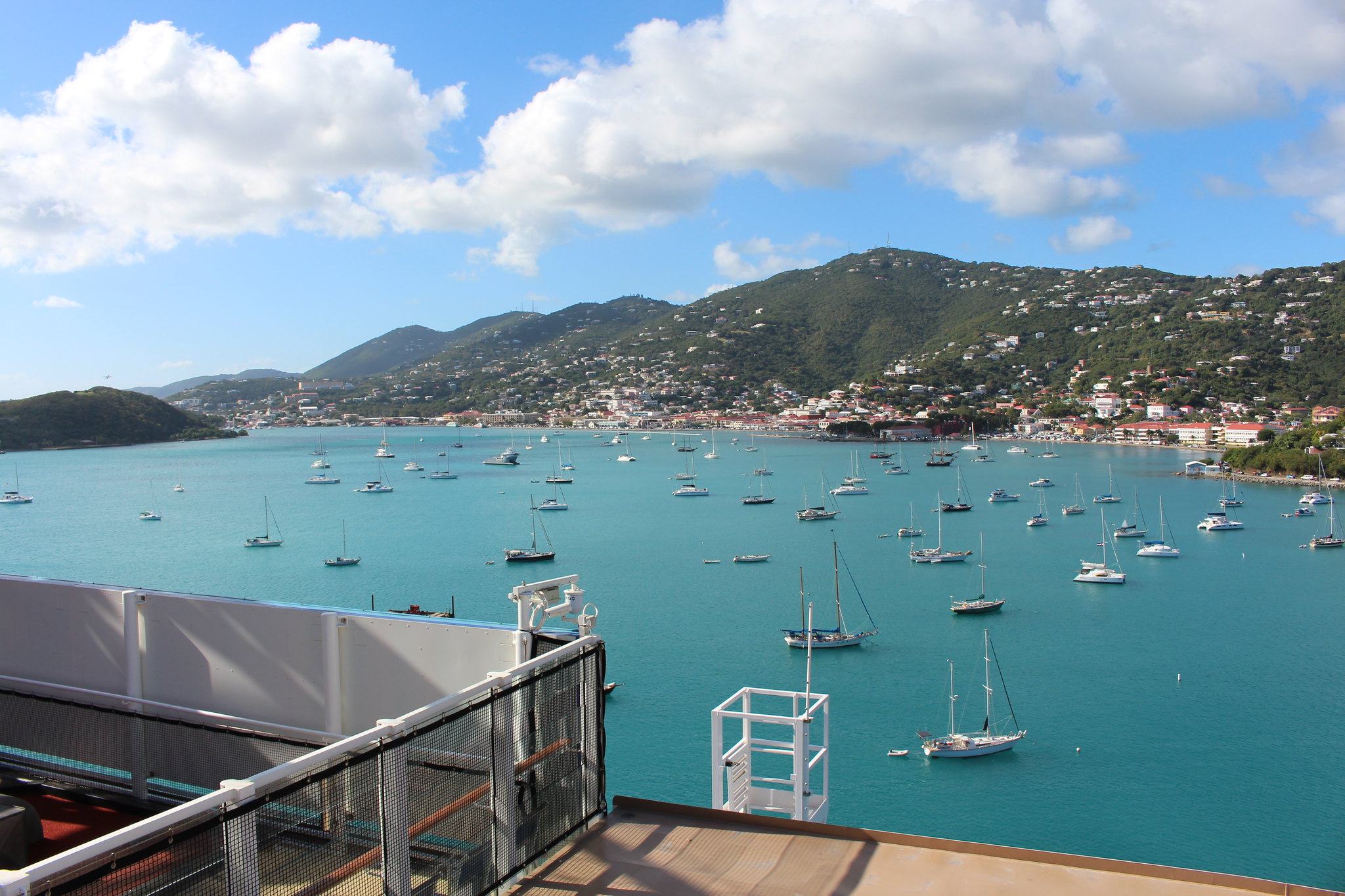 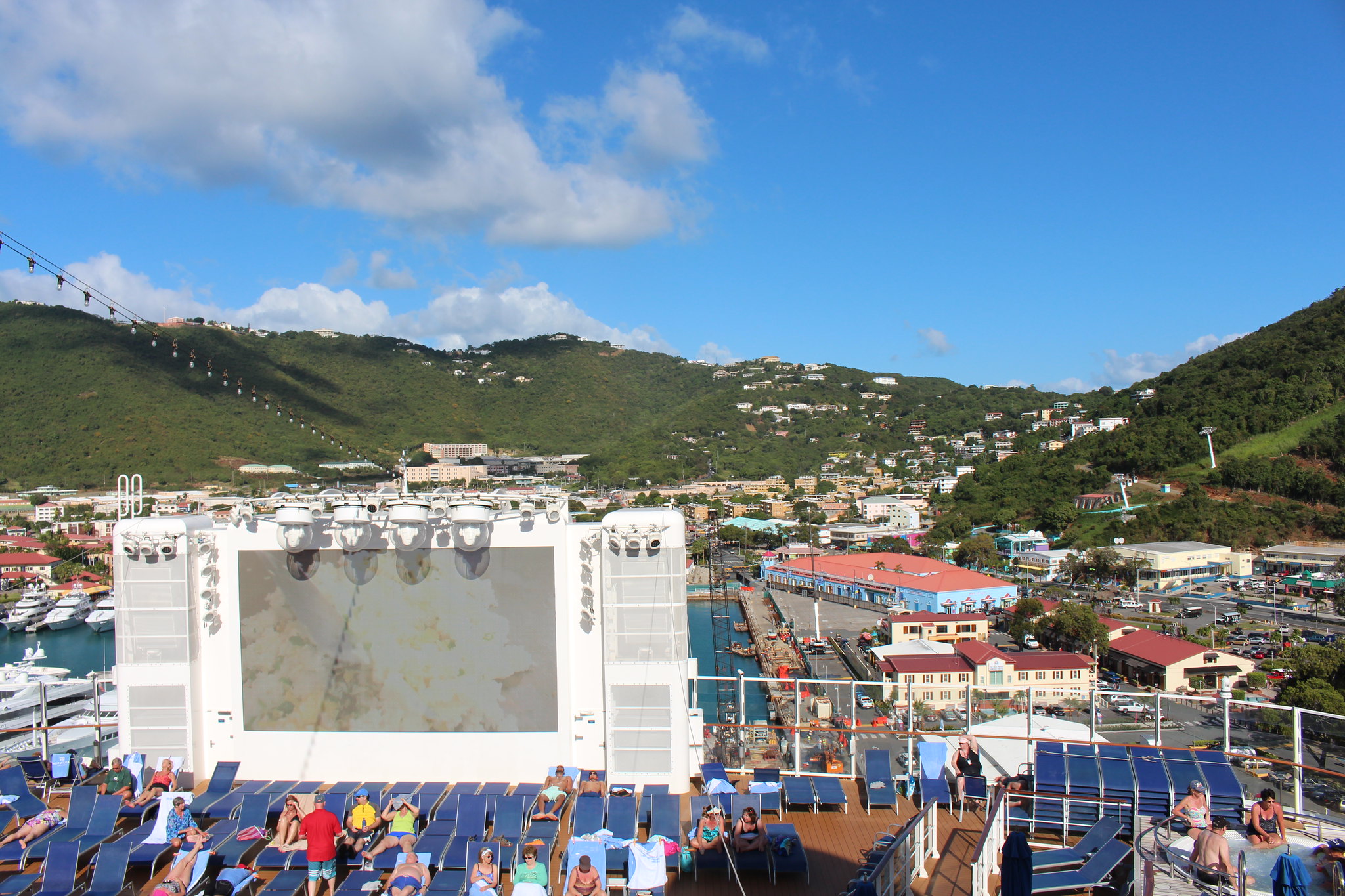 And Play a little Two-On-Three 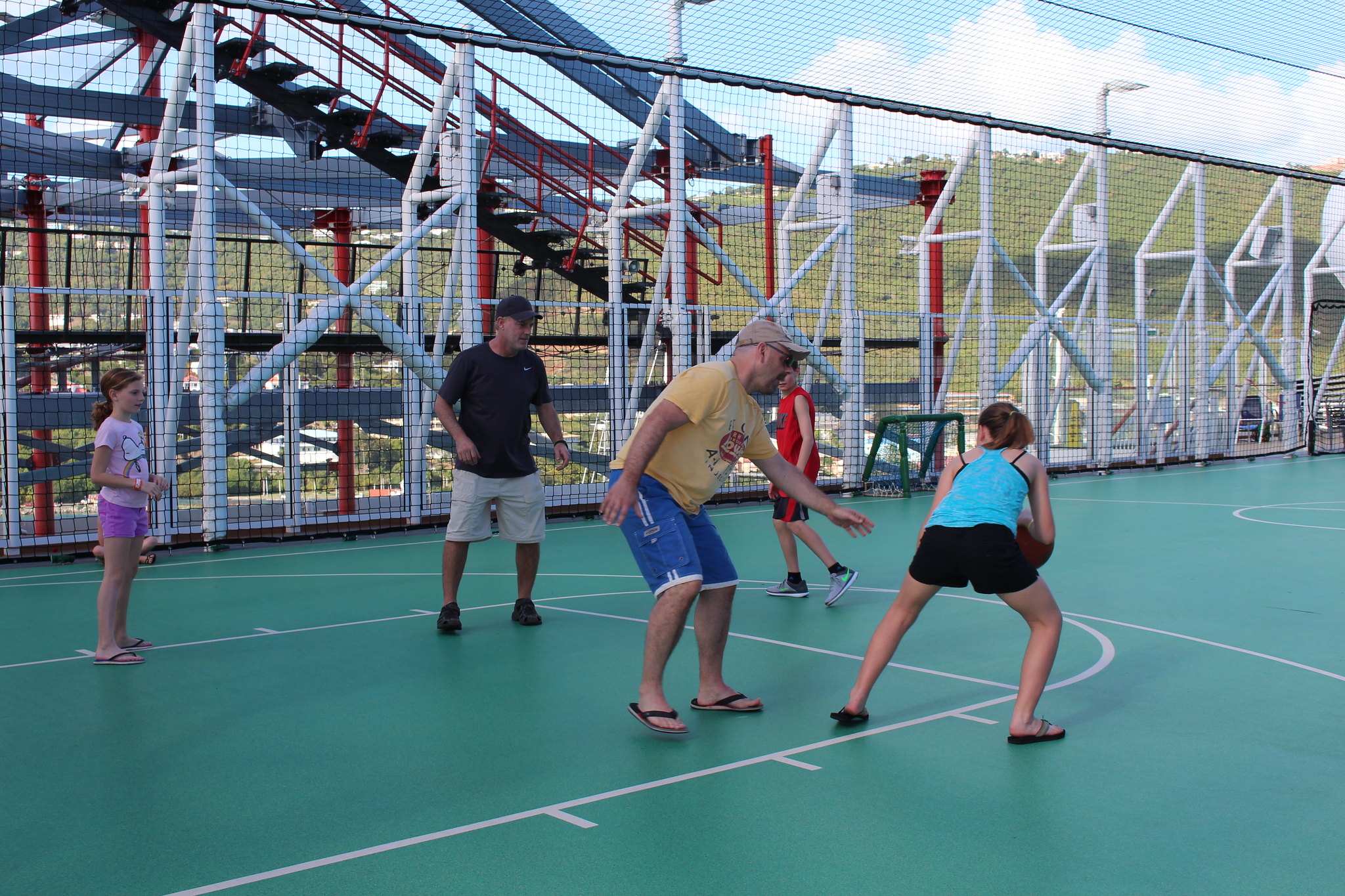 Pretty sure us old guys won!

After a little snack we got ready for our night. Tonight we go have dinner and a show with the Four Seasons. We come in and are seated where the adults and kids can sit somewhat separately from each other but I think Kate and Sophie also jumped in with us. We sat in the semi-circle booths with nice cushions to sit on. The wait staff this time was just OK, not bad but not quick either. Unfortunately the kids didn’t like the food options at all this night. They kind of ate and I suppose we could have been those people that try to order something that is not on the menu. Maybe too polite that way but they should have something available for kids so we were dissappointed in that.

The show….it was OK as well. The music was good BUT again, not really for the kids. Big tip here, don’t take kids to the Four Seasons if it is on your ship. They won’t like anything about it. 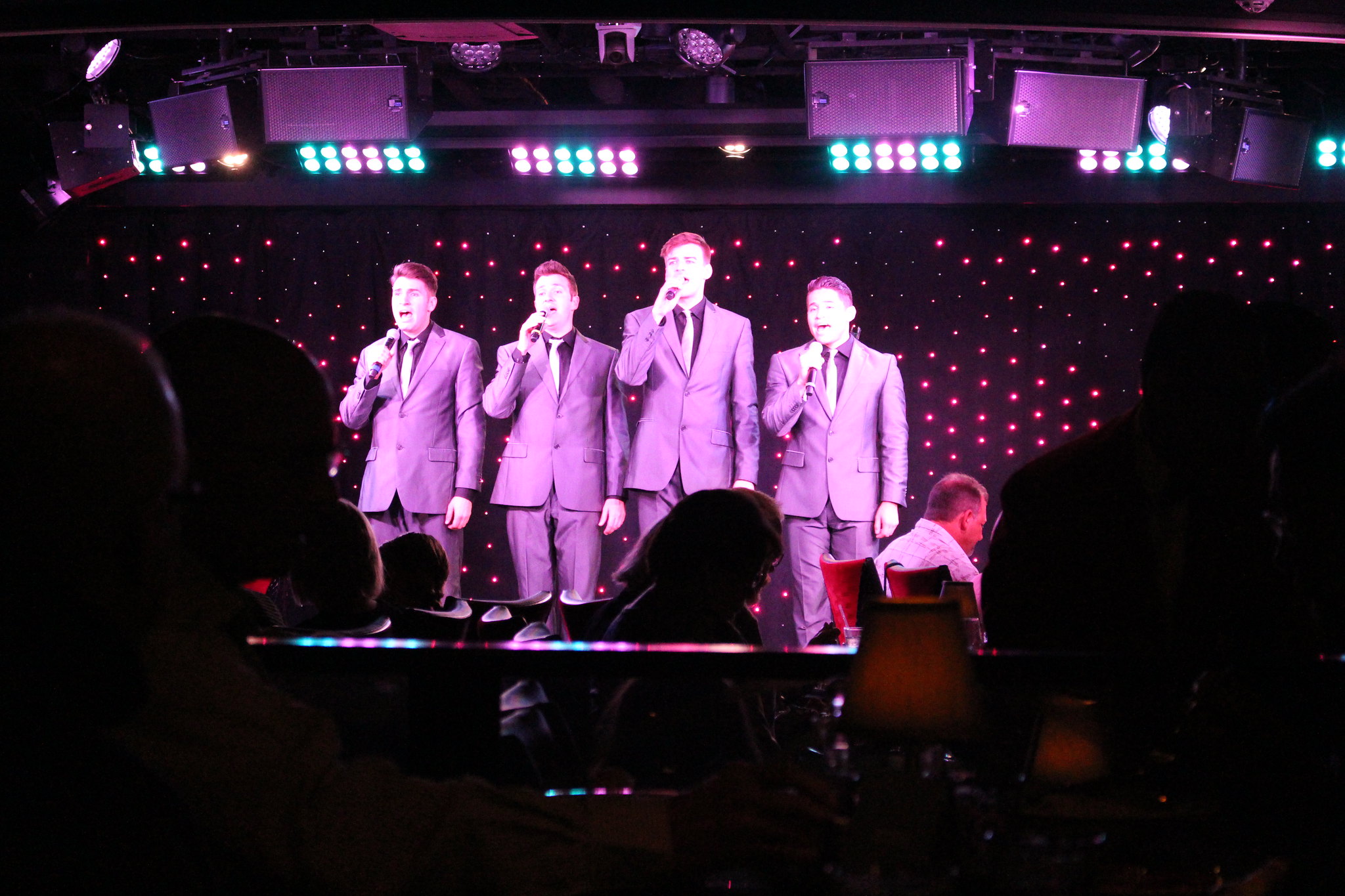 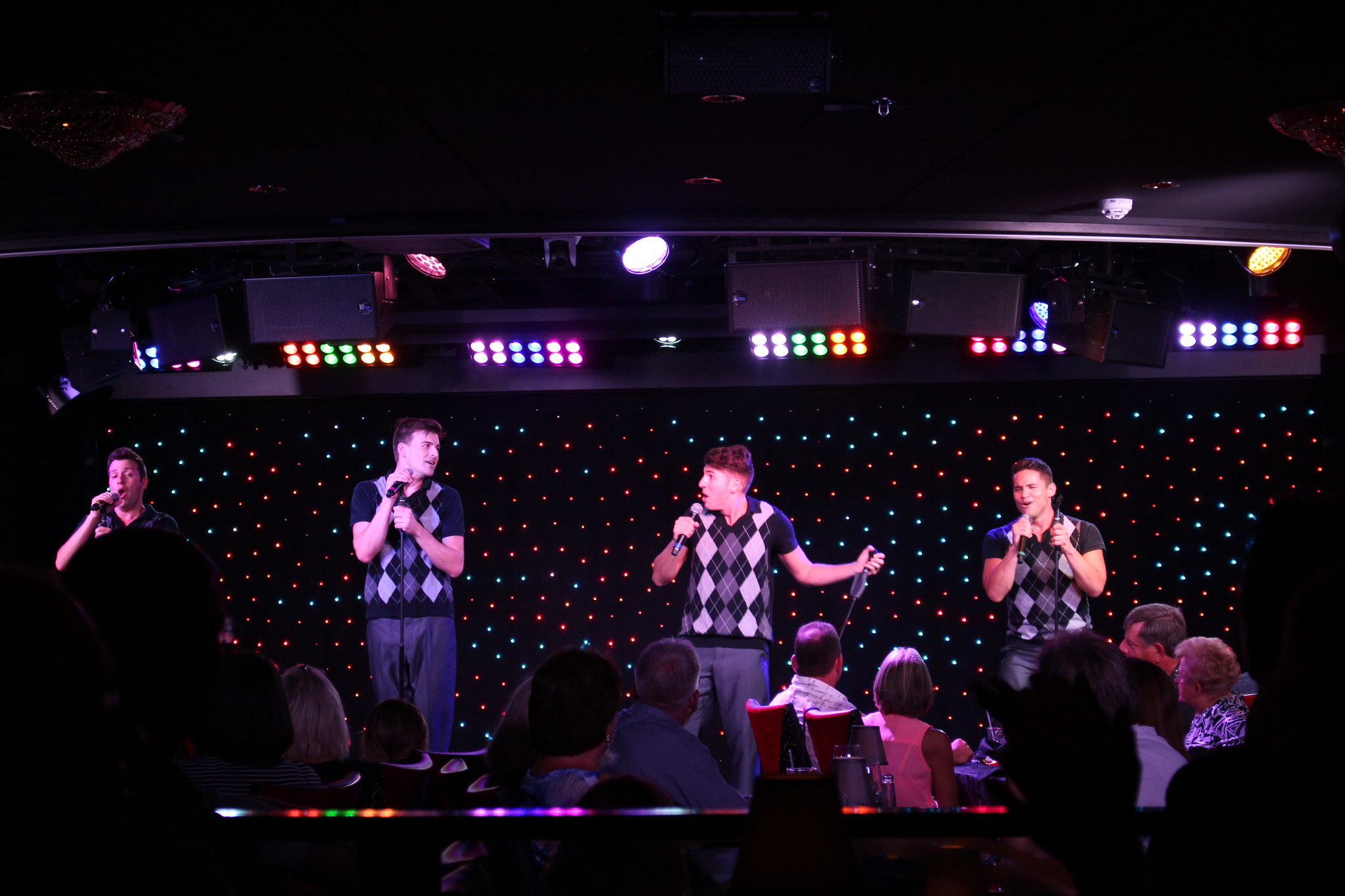 But at least Sophie and Kate were able to take pictures with the singers!! 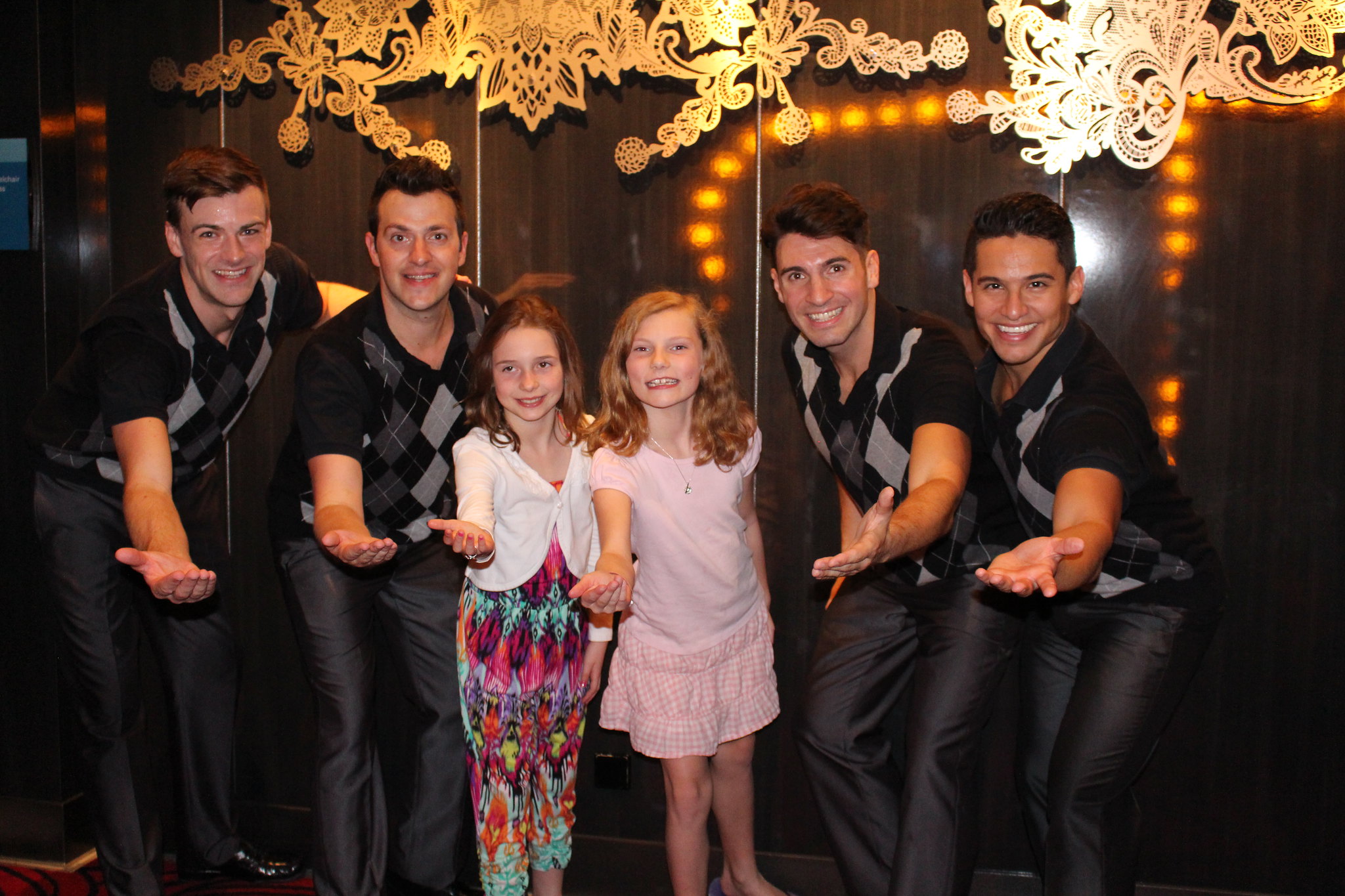 Kaitlyn and Ally split quickly as they wanted to hang with their group but we wanted them back for some tap dancing show that we decided we would go to. Partly because we thought Kaitlyn of all people would enjoy it. Well, she was more concerned about the hot tub party the Entourage was going to have and was TICKED when we made her come to the tap dancing. This was family time. We knew Ally was not happy at the time and thought Ally was going to be one who was maddest but it turned out to be Kaitlyn. Ally didn’t show if she was upset but Kaitlyn clearly did in a way that was embarrassing as clearly our friends could see her temper tantrum.

To make matters worse, the performance wasn’t good and he didn’t do a whole lot of dancing. So once the show was done we let her go right away and she STORMED off. We took the younger four to their clubs and tried to figure out the next thing to do. While we did that I snuck off to see how Kaitlyn was doing with the hot tub. They were in the tub but because they were late, got stuck in the one with no boys. OH WELL! This dad had no problem with that.  They said afterwards it turned out to be lame anyway but at that time Kaitlyn’s damage had been done I was mad.

Most turned in early this night because we had an early morning at Tortola. I, however, was still steaming at the actions of my daughter. So after we got every down, including my wife, I left and went walking around. I also really wanted to try the wings at O’Sheehan’s. I had been reading about how good the late night food was, particularly the wings so I sat down and ordered. By myself. It was fairly quiet at O’Sheehan’s but there were other people talking around the area. O’Sheehan’s is not enclosed so you see and hear everyone walking by.

After I had my guilty pleasure. I turned in for the night.