Again, sorry for the lack of pictures. Tomorrow will be more, but below is what happens when you stop at Amber Cove in the Dominican Republic….

We had an excursion planned at Amber Cove and it was set to leave at 11am. It was nice because the night before was New Years Eve, and while we really didn’t go to bed any later than any other night (1 am), we were able to wake up a little later if we wanted to. The bad thing about being on deck 2 is when the ship was trying to dock and would use its side thrusters, it was vibrate the ship enough that it would rattle the bunk above me that Ella slept in. So of course I really couldn’t sleep in. We got moving around 8:30 and headed for breakfast and Augers were about ready to do the same.

After breakfast we headed off the ship and down the long pier. It is actually really long that they have free rickshaws to use but they do mention that a tip is nice. We walked as we had time to find our way. You make your way through the duty free building and just on the other side are the excursion counters out in the open. We found ours and they showed us where to find our bus. We were early and sat on the bus for a while and actually it didn’t leave on time either.

It had Wifi which excited the kids BUT we didn’t let them bring their phones because we wanted to be careful as we didn’t know exactly some of our stuff would be left. Also took some planning for the 2 diabetics as they tried to plan their way around whether they would need food or not. Chris brought some bars in a baggie and stashed them away in his pocket (surprisingly enough they were still pretty dry by the end of the excursion).

We take about a 40 minute bus ride and they guy talking kept saying, “Listen Family” which was cute and then he would tell us how to say some Spanish words. Along the way he would point out a few things but I will say, it would be great if he really told us more about the Dominican such as the economy, what most people do for a living, what certain buildings were along the way, but he was most interested in teaching us a little Spanish.

Before we get there he says how there are a lot of people and that there are lockers down the way. So we get there and grab our life jackets and helmet and ask where the extra lockers were. There was some confusion as to where or why we were being sent down there but we found lockers and they gave us a key to latch on. It also was by the bathrooms which was nice cause some of us had to go. Again, after some confusion as to whether everyone was there, we started walking….and stopped at the bathrooms. Then we were off.

The walk was another 35 minutes or so. Everything I read so be prepared for the hike as it can be strenuous. While I’m not in the best of shape and my wife works out most every day, we were both sweating and maybe I was panting a bit  BUT there were people heavier than myself and we took about 3 breaks on the way up which was plenty. After we walked up….we walked down….What the? Could we have just cut off some of the climbing part?

They sent someone with to photograph and video everything and then you had to pay $50 for the jump drive. Part way through we knew this would be a great idea to have so the pictures are from the photographer. 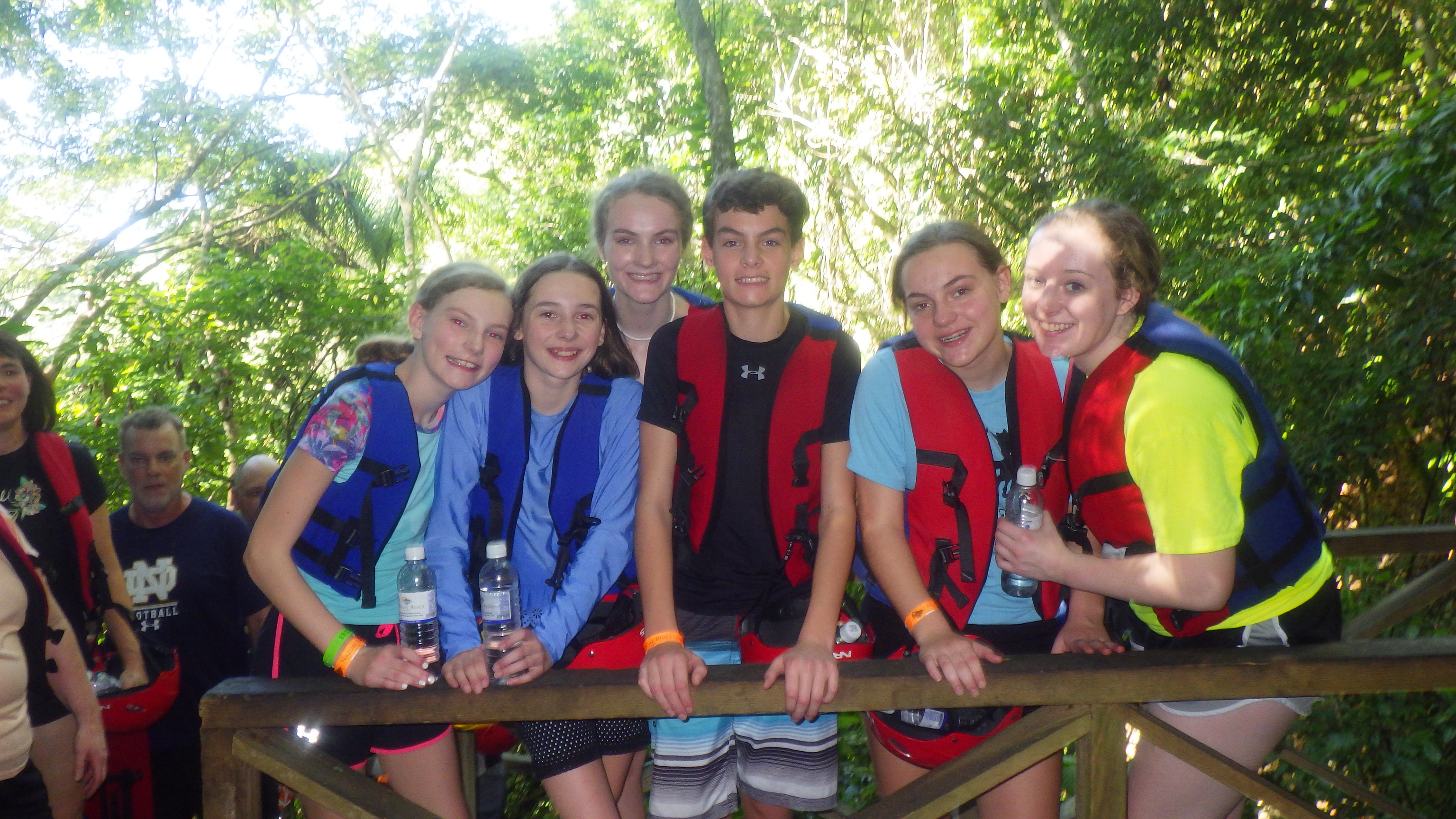 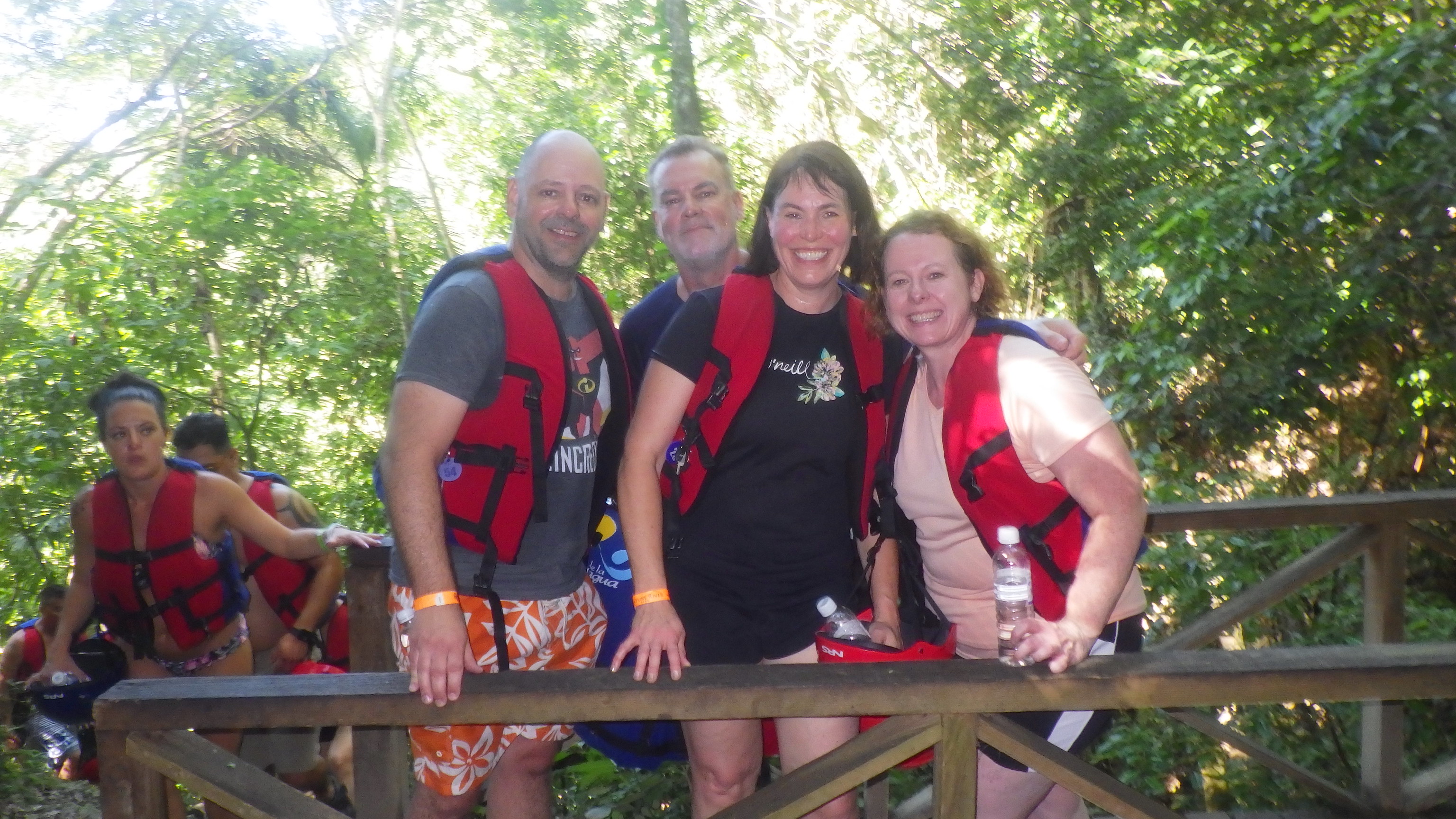 On our final break before we treck back down a bit to the first jump. 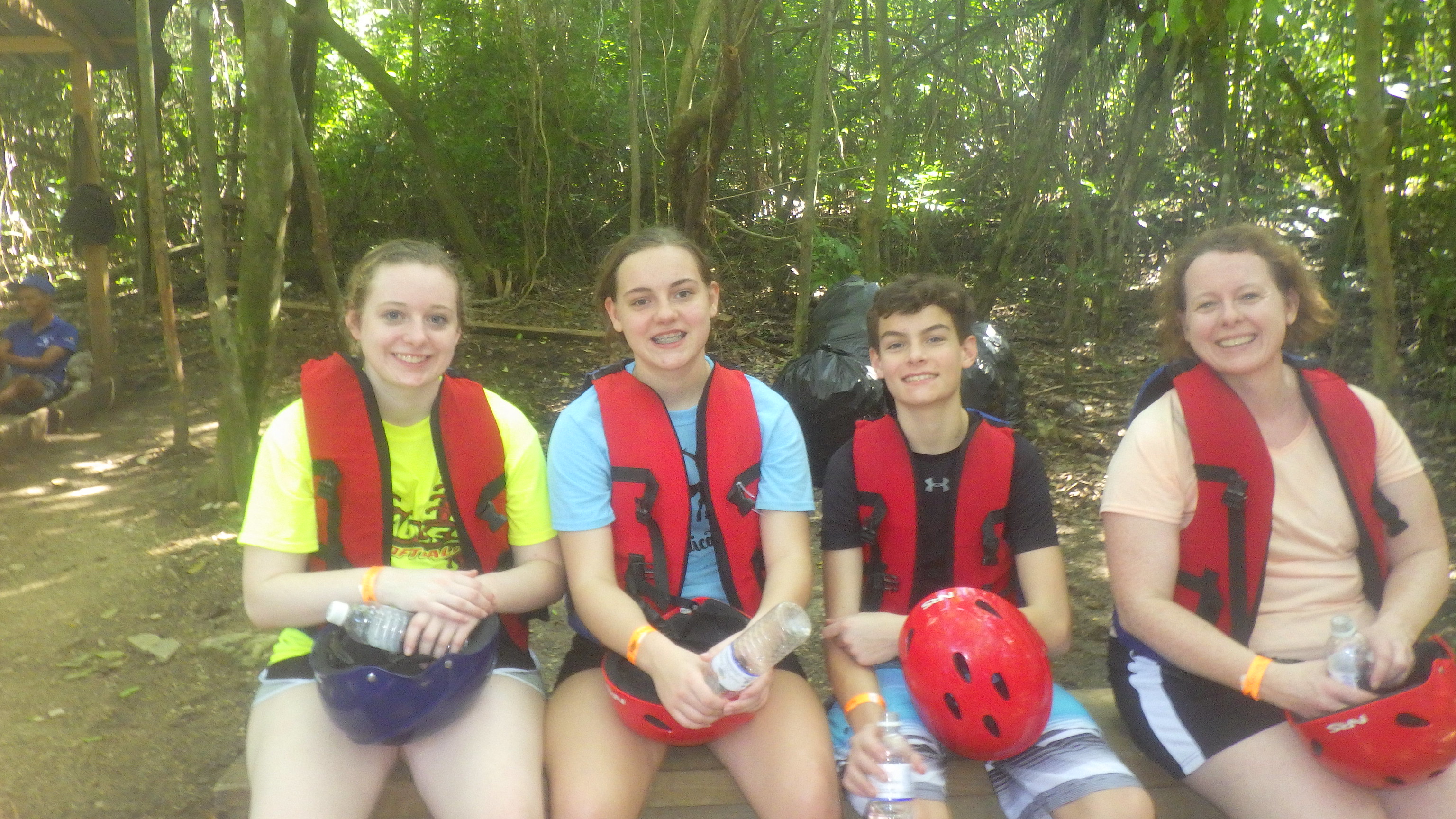 As I said, there is video that I will eventually post where we all first jump in. As I sort of expected, Sophie didn’t want to do that jump and then neither did Kate so Heather took them down the stairs for people who couldn’t do the jump. The following pictures are from when we first are in the water and waiting for others to come. 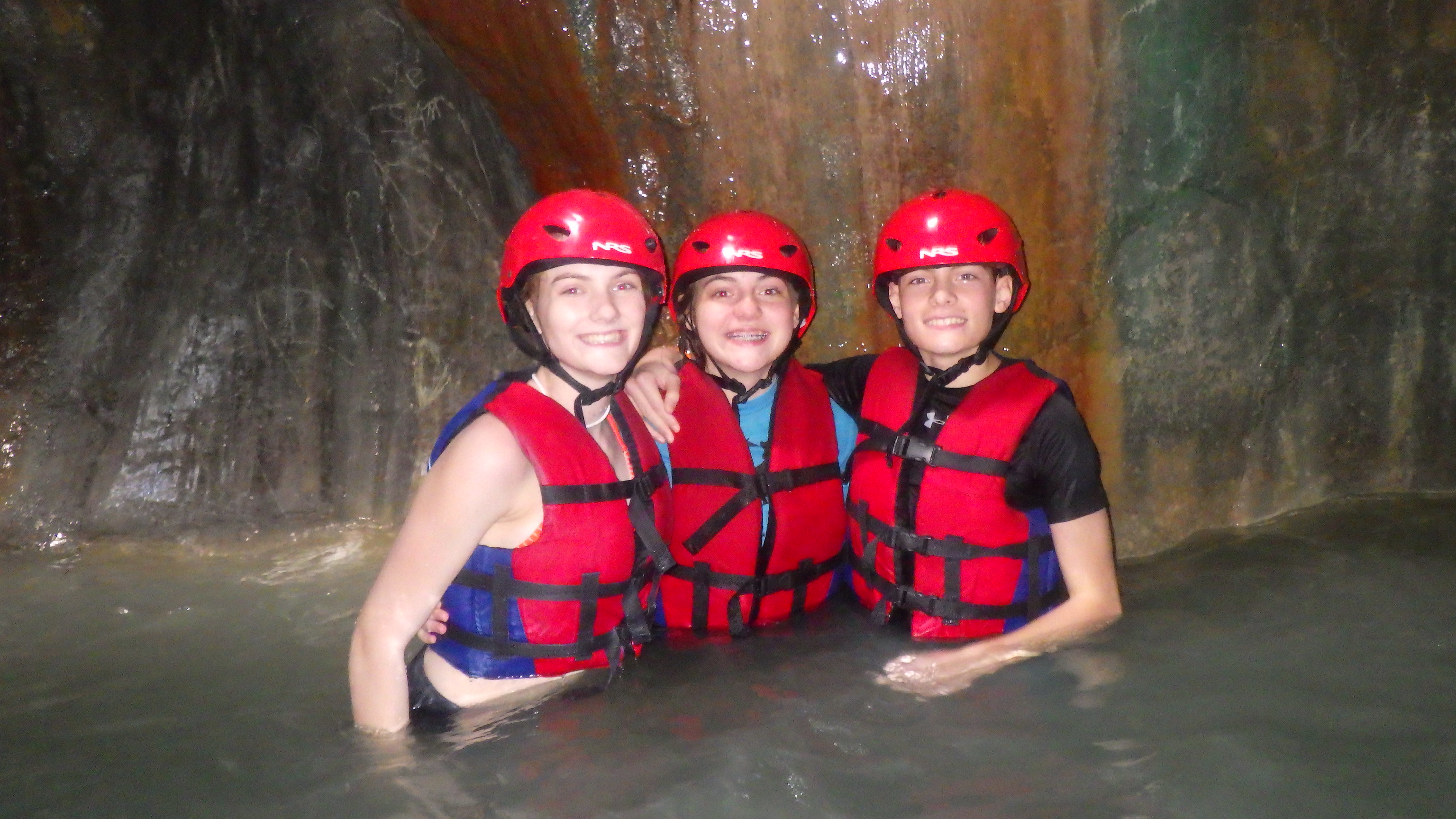 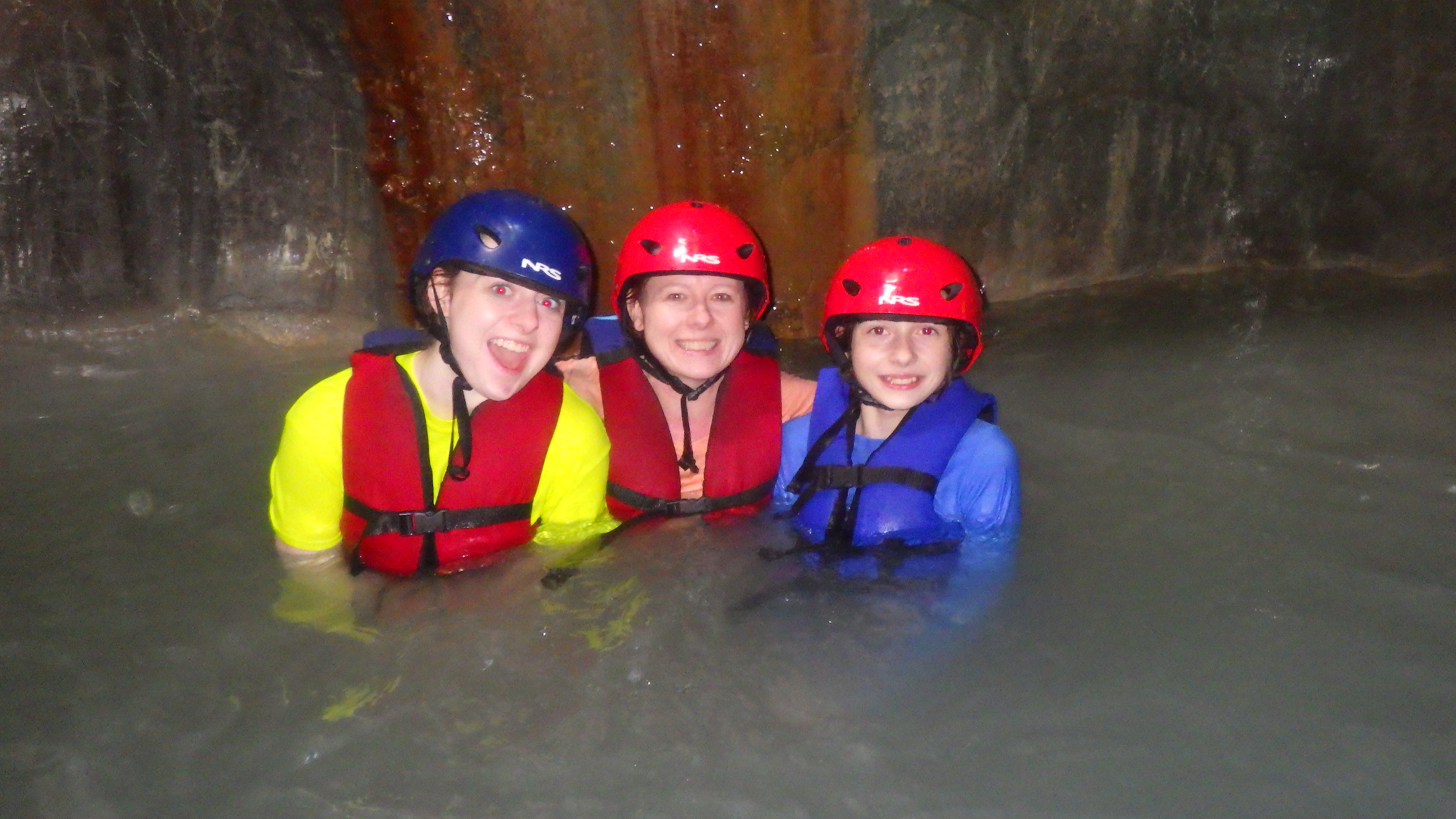 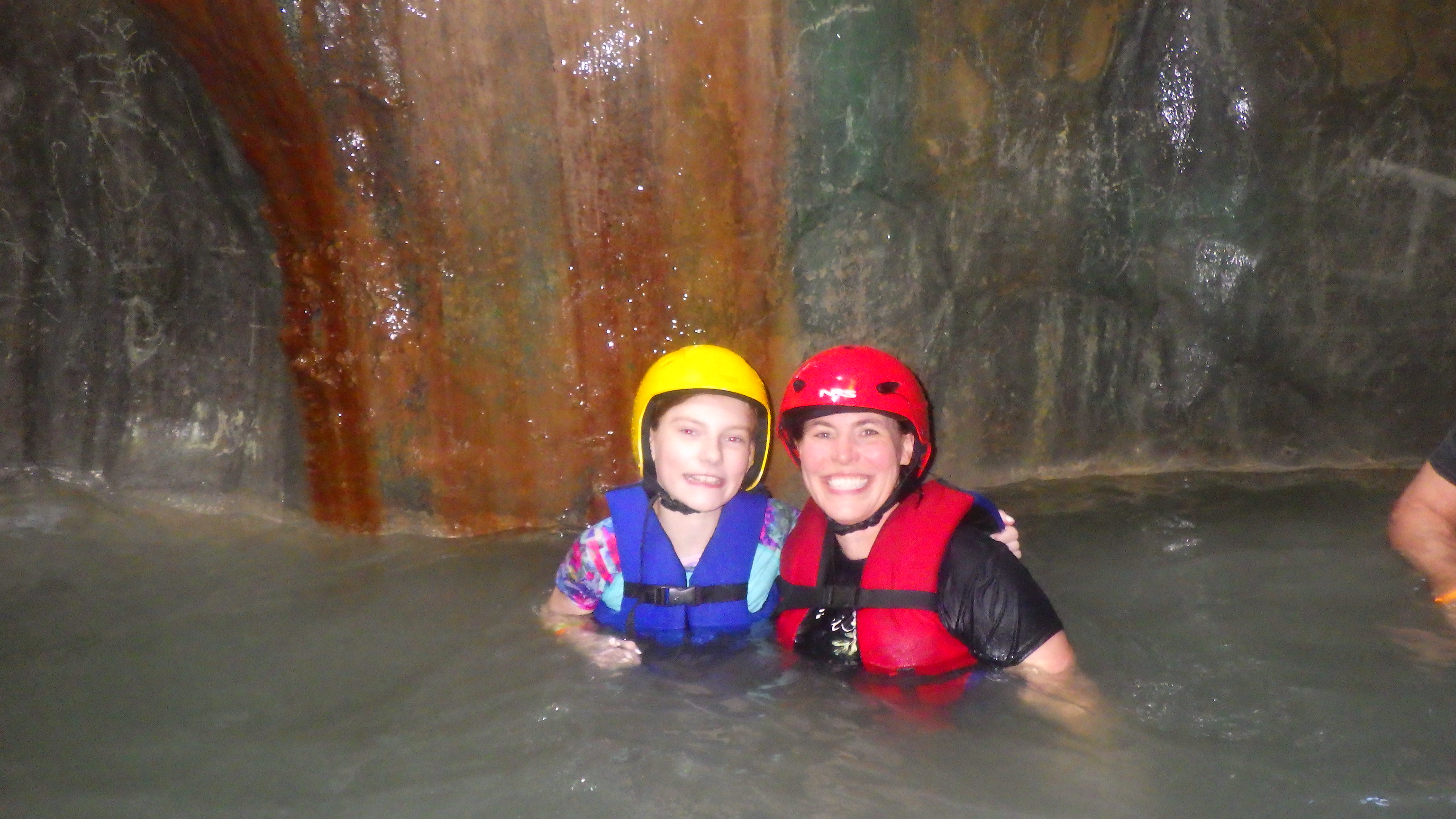 Making our way to the next slide. We did the 7 falls through Carnival. There are up to 27 falls but the guide said not all were open due to the amount of water at the time. Through other vendors you can do 14. Honestly it took everyone a bit to get used to the water. It was cold and you have to sort of trust in the life jacket that you really don’t have to do much paddling, you just bob around a bit. Once you get used to it, things were great! 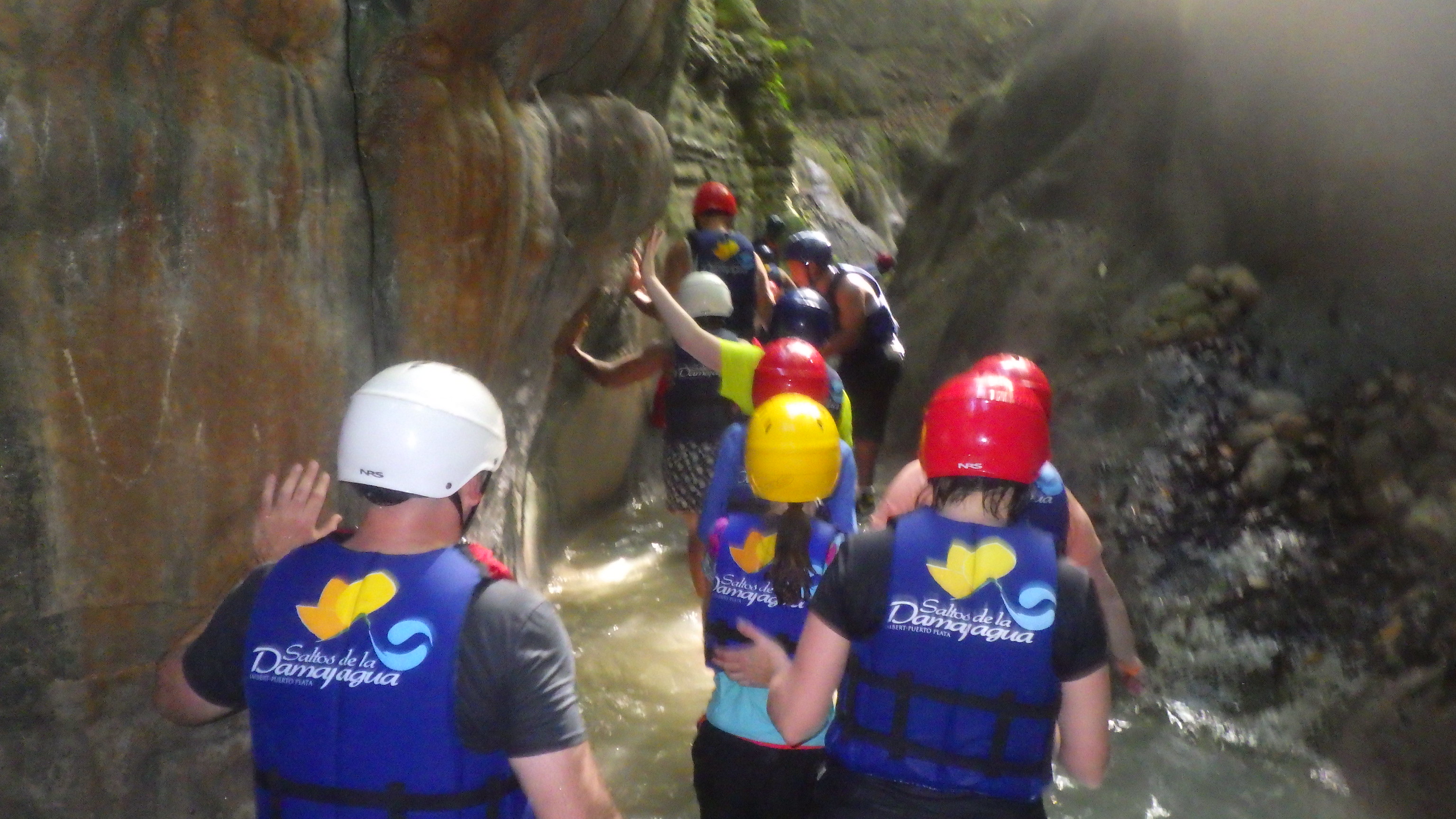 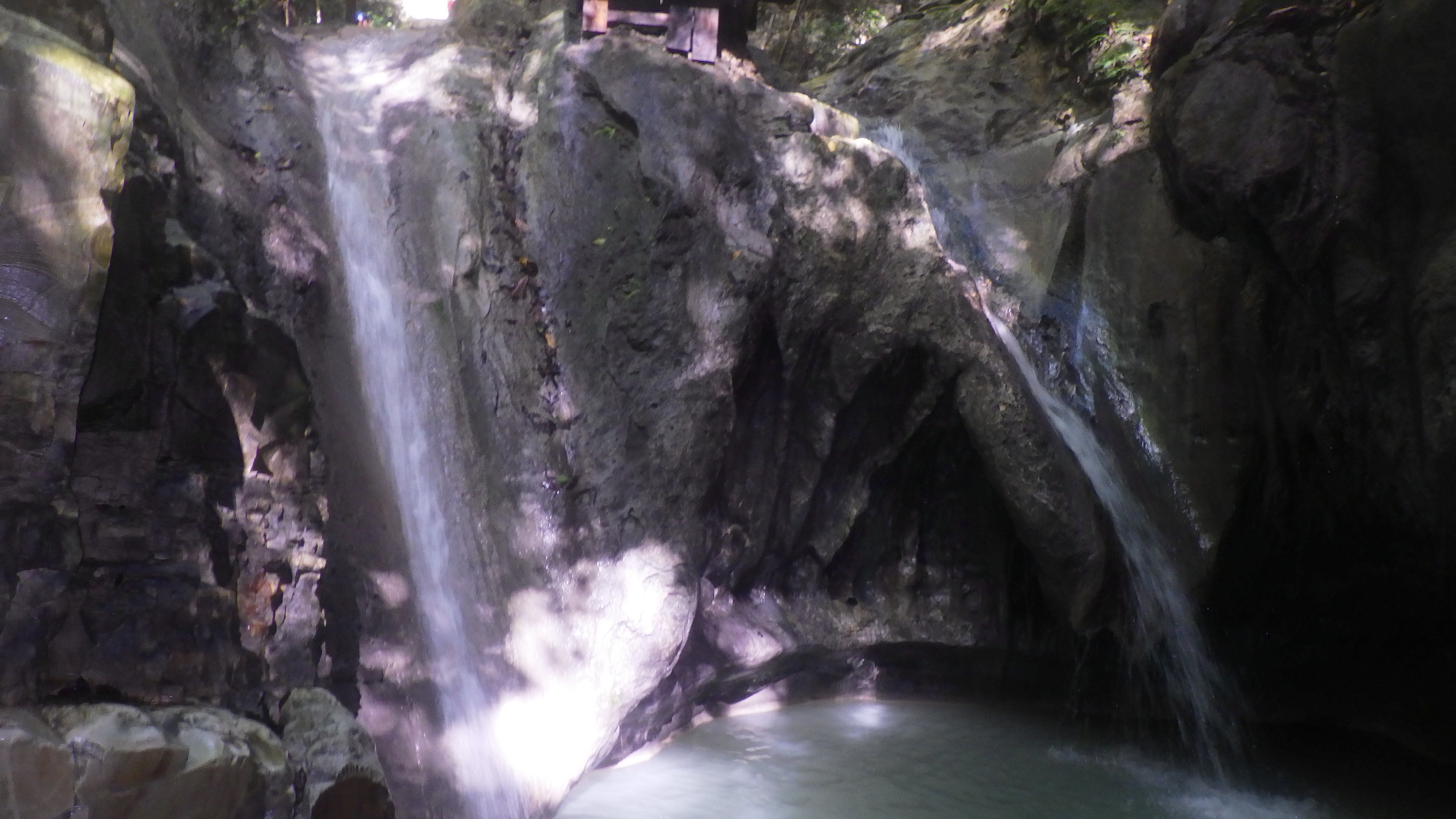 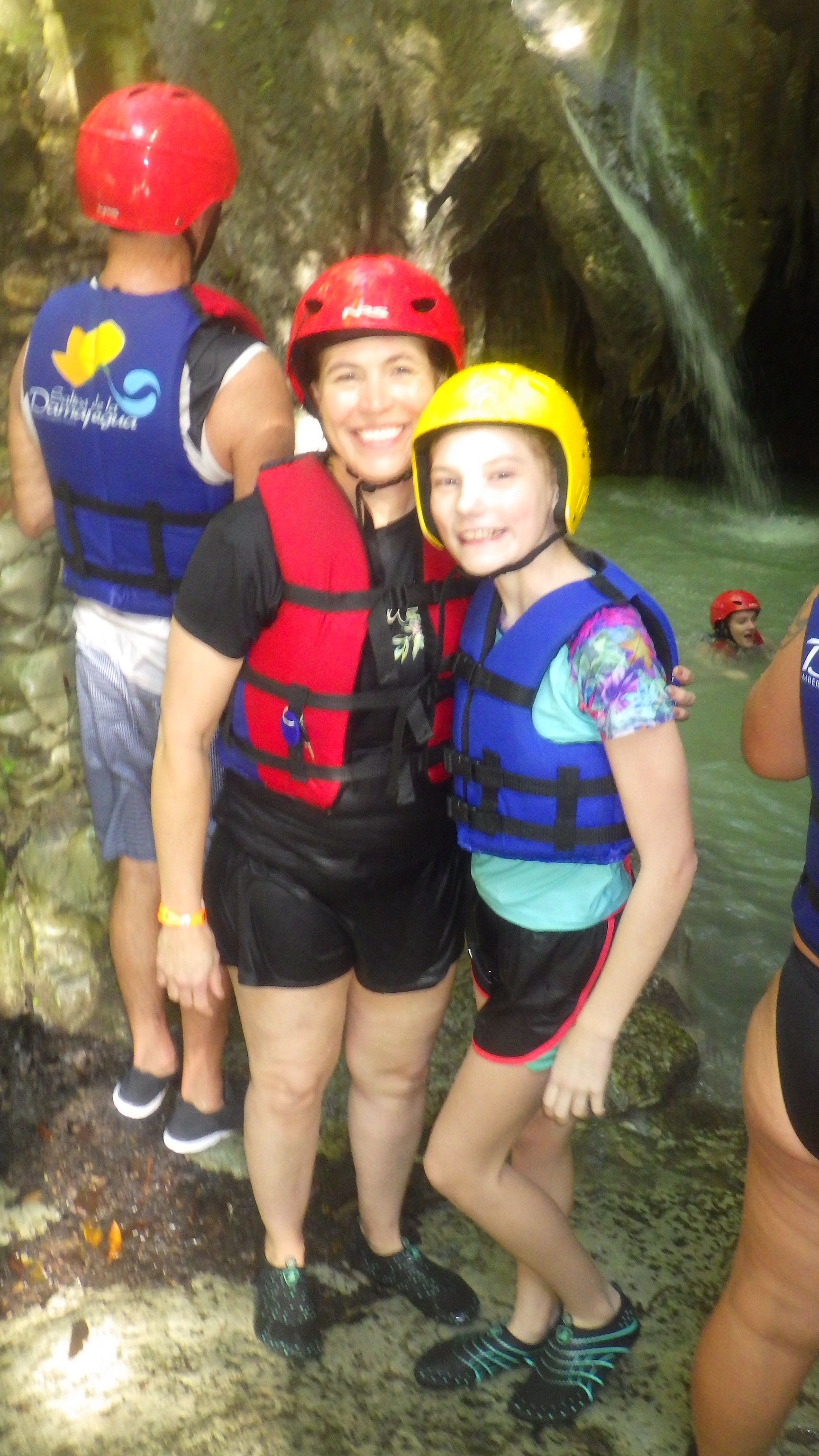 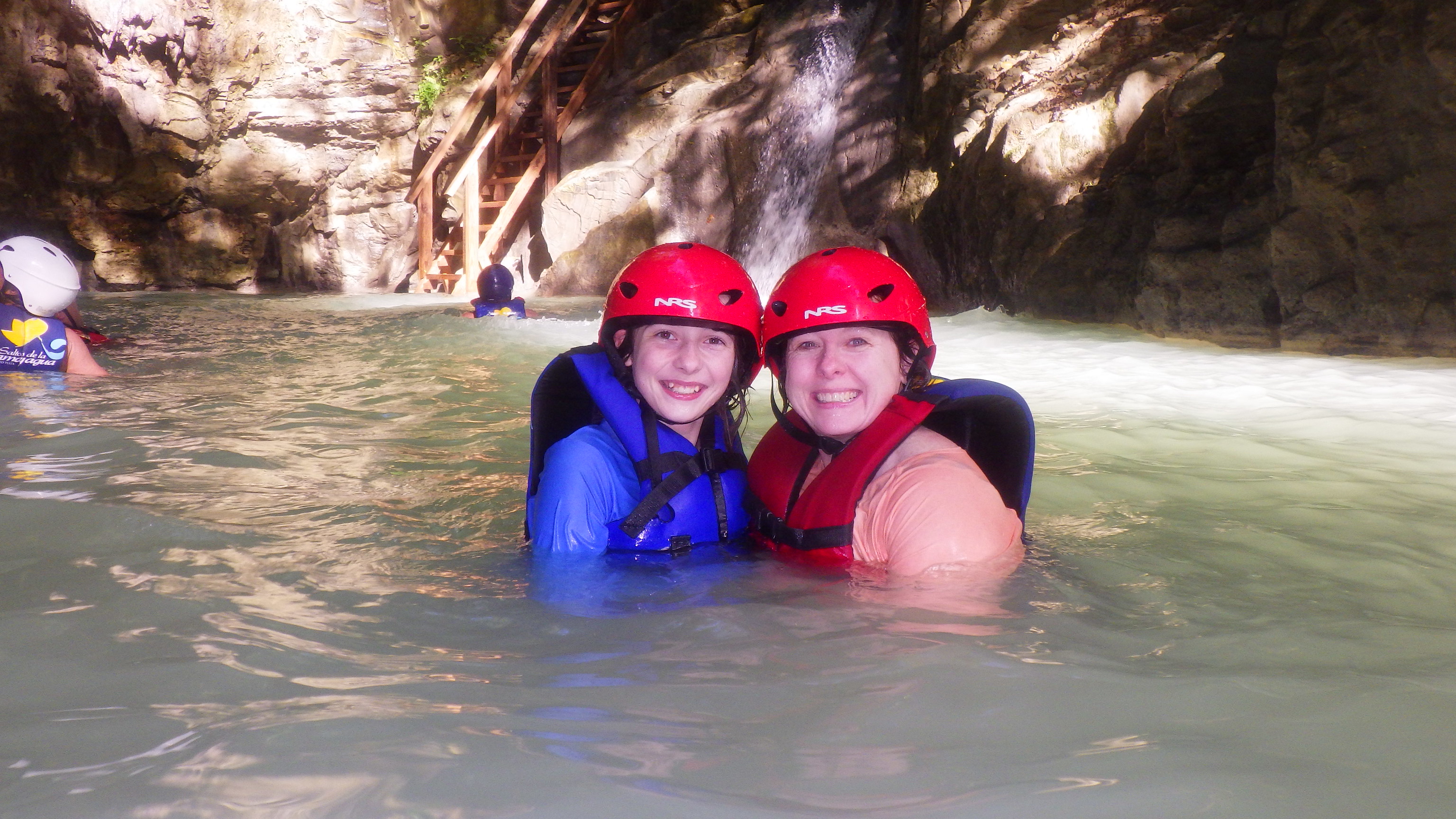 Often I would pause to look around as we would float in our life jackets and take in all the beauty. 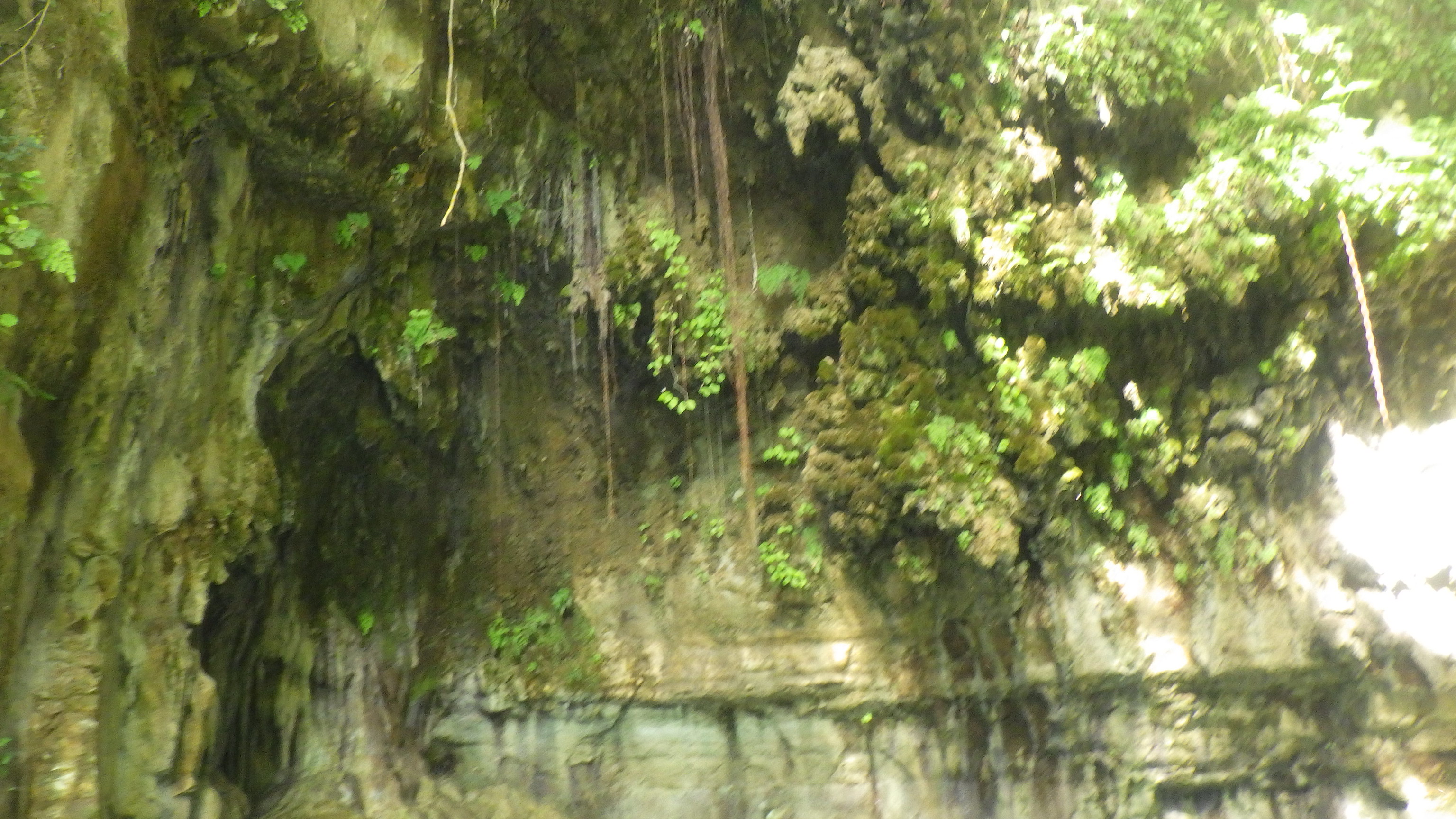 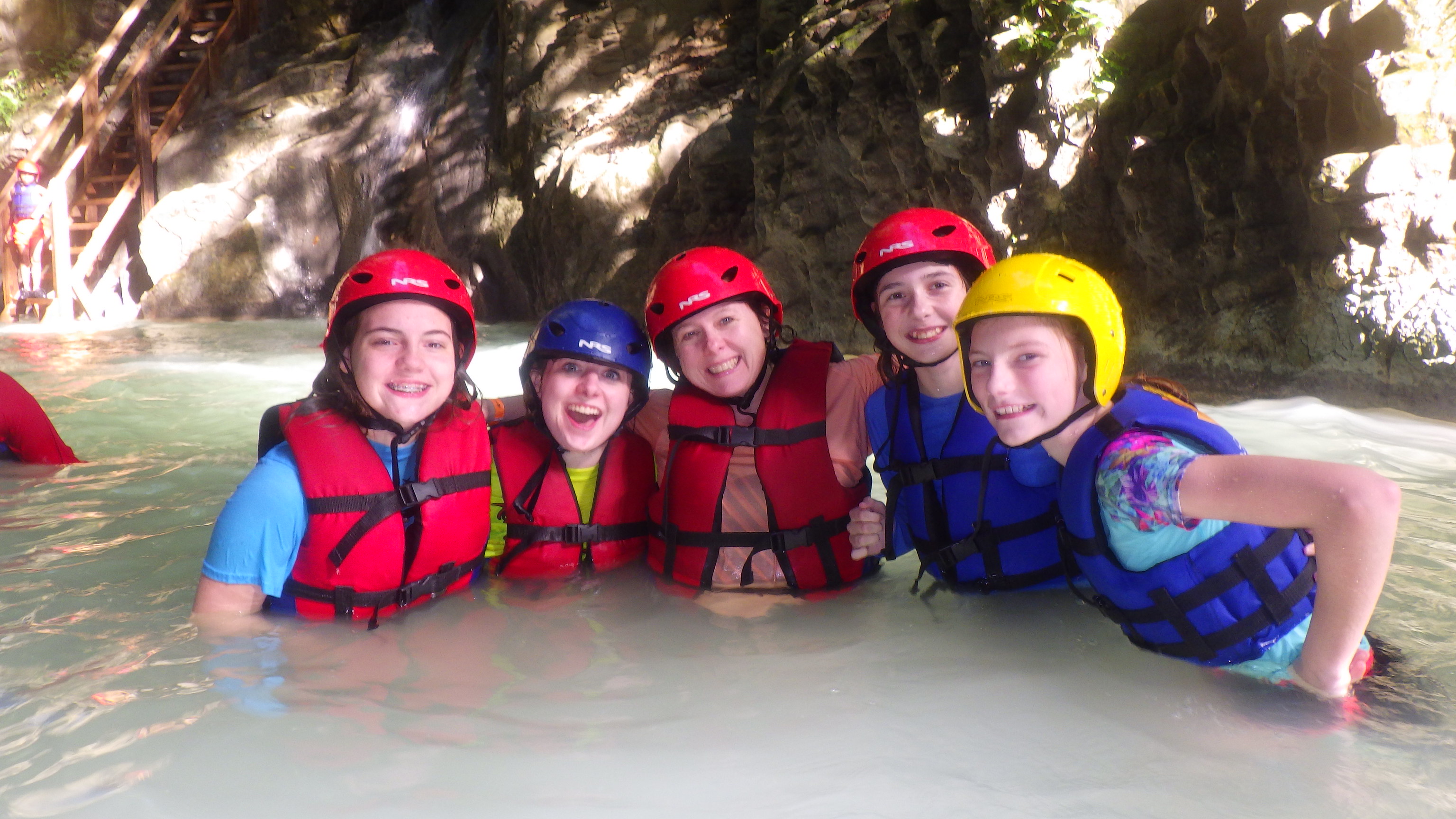 The end seemed to come quickly but we sure enjoyed it. 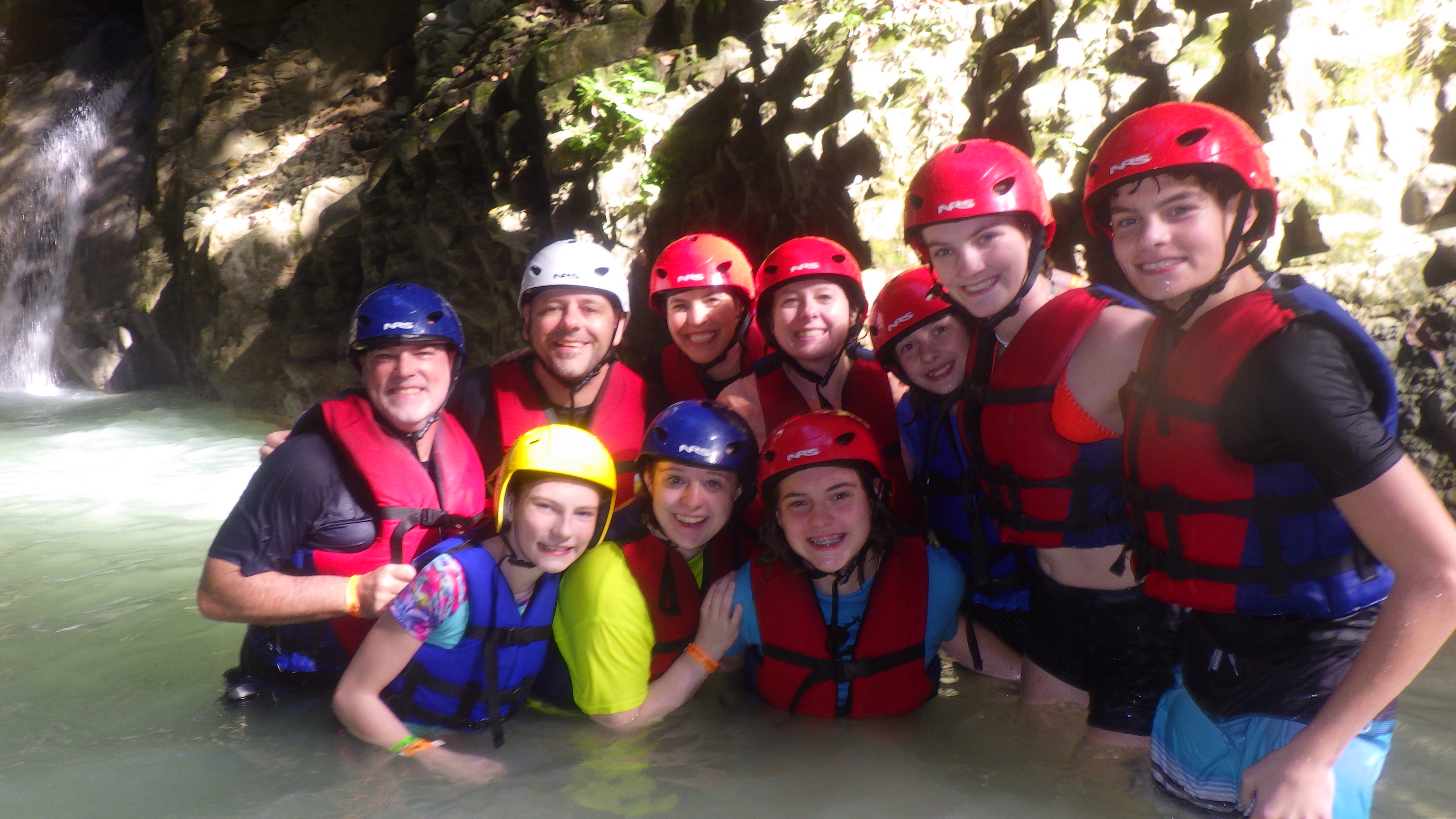 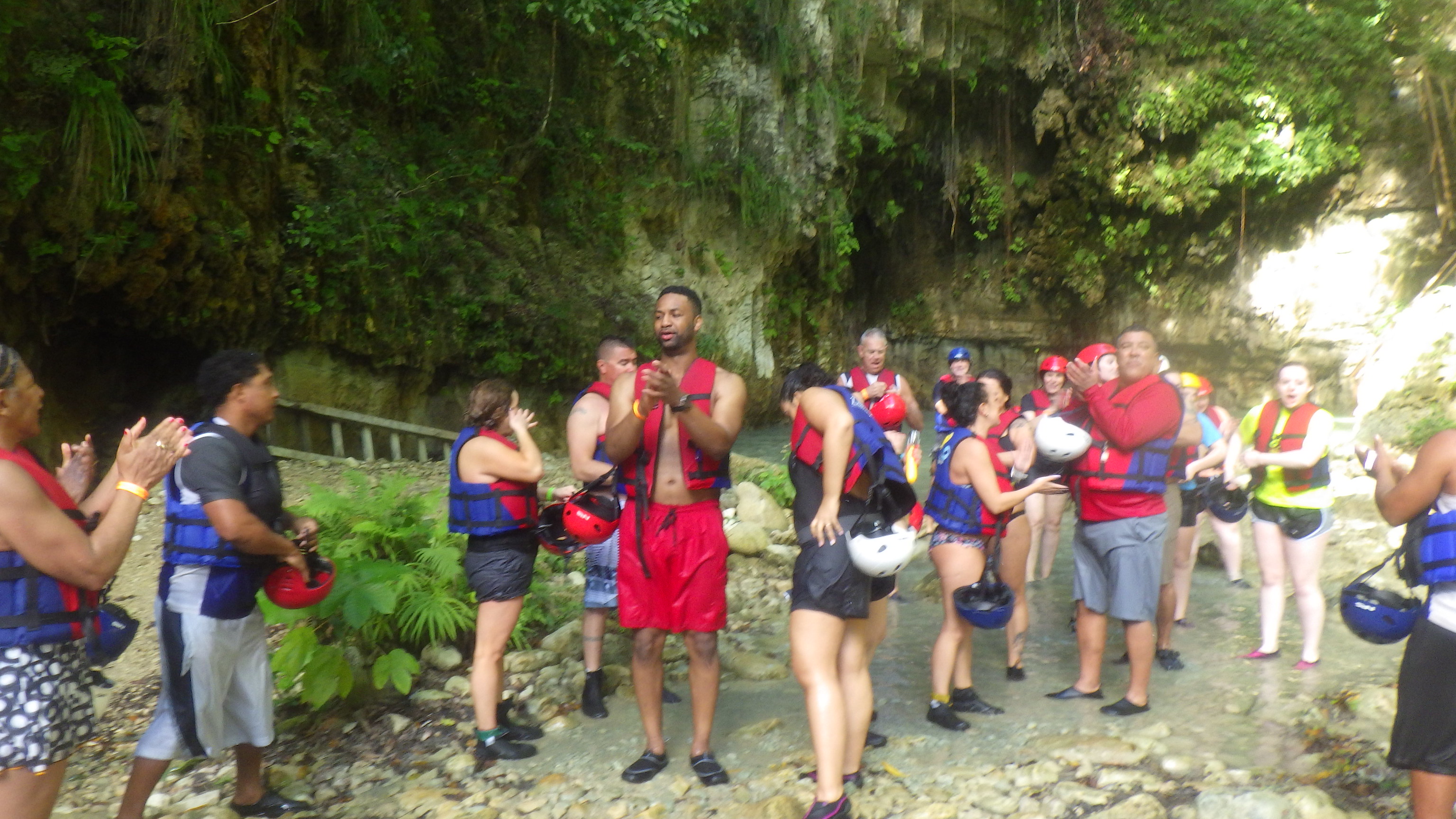 We made our way back and by this time my feet were already a little sore from some of the rocks. It’s very important to have good water shoes for this excursion. They made a couple of the Augers sign waivers because their shoes were soft soled.

We were tired for the bus ride back so we all napped a little. We thought we were running a little late based on what time the bus had. We had all left our phones and Apple Watches back on the ship so we were confused. I really wanted to get my normal souvineir of a magnet but ran out of cash. Linda borrowed me some money so I could stop quick. I quick ran in, found a good magnet and was out and met everyone at the duty free store. We walk to the ship….only to find out it was actually 4 by the time we got to our room. We were thinking it was 4:30 and close to the time for the ship to leave. So we split up. We hadn’t eaten since breakfast so we all went our separate ways to grab a snack. The adults went to Red Frog for happy hour 2 for 1s. 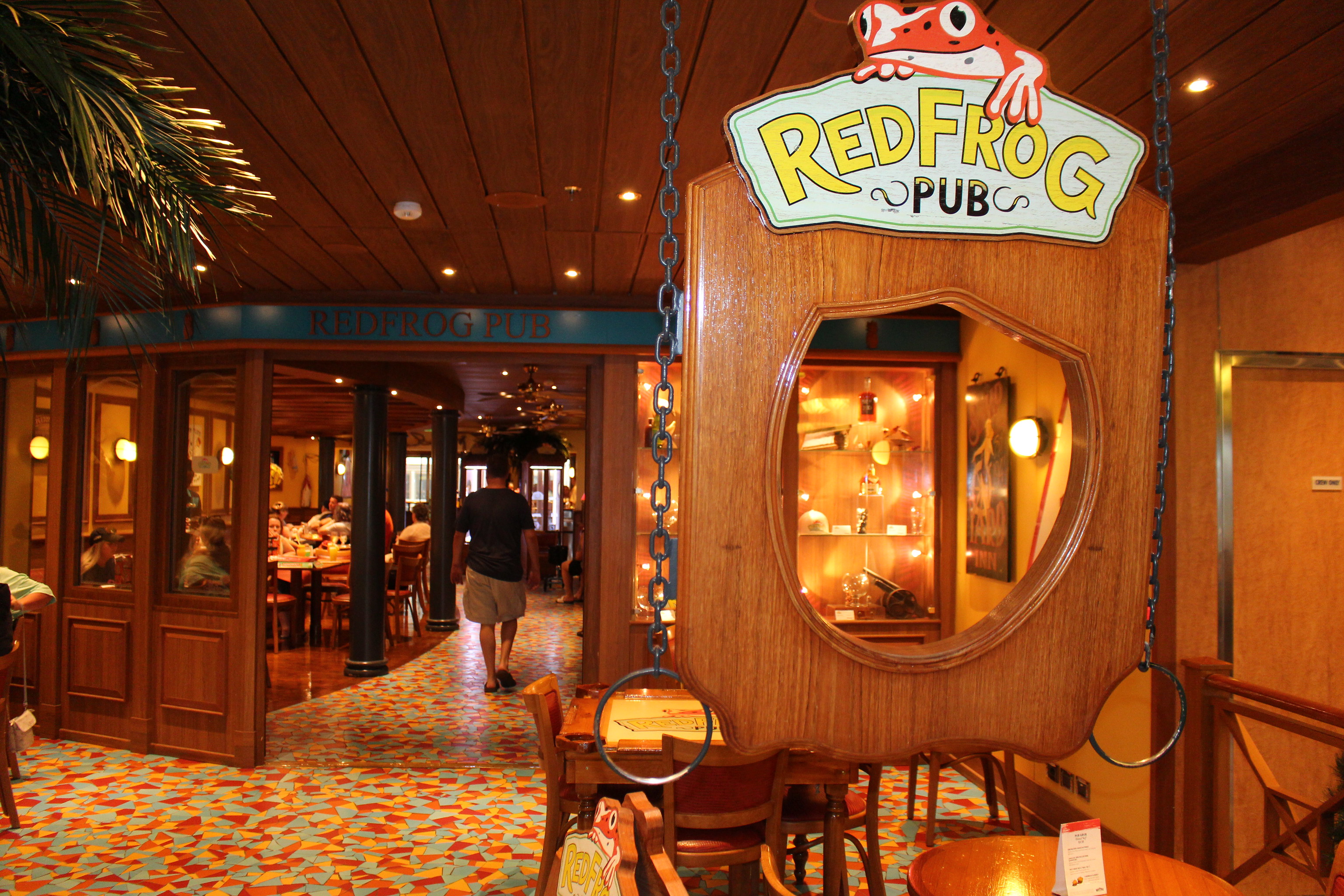 Heather and I had ordered our two drinks plus I got a bucket of 10 beers for the price of 5 and Chris also ordered the same. We also ordered some food. Heather and Linda went to change into their swimsuits while we waited for our food and Chris and I started playing Yatzee. After we wanted to jump into the hot tubs on deck 5. Chris and I hadn’t changed into suits yet so we were going to go down change…but we got side tracked along the way. With our buckets of beers, we decided to take some stupid photos with the professional photographers in hopes the wives would find them later. 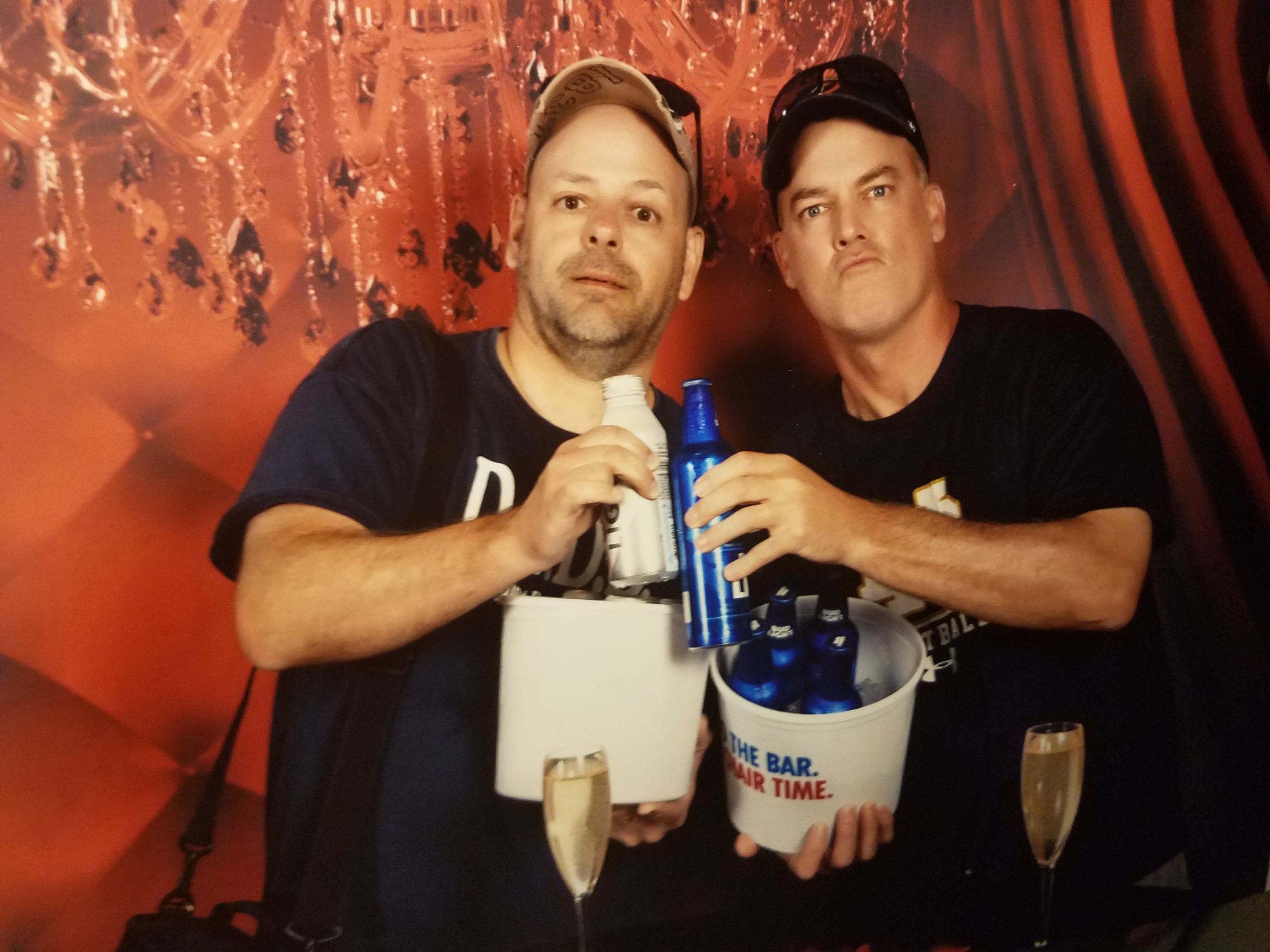 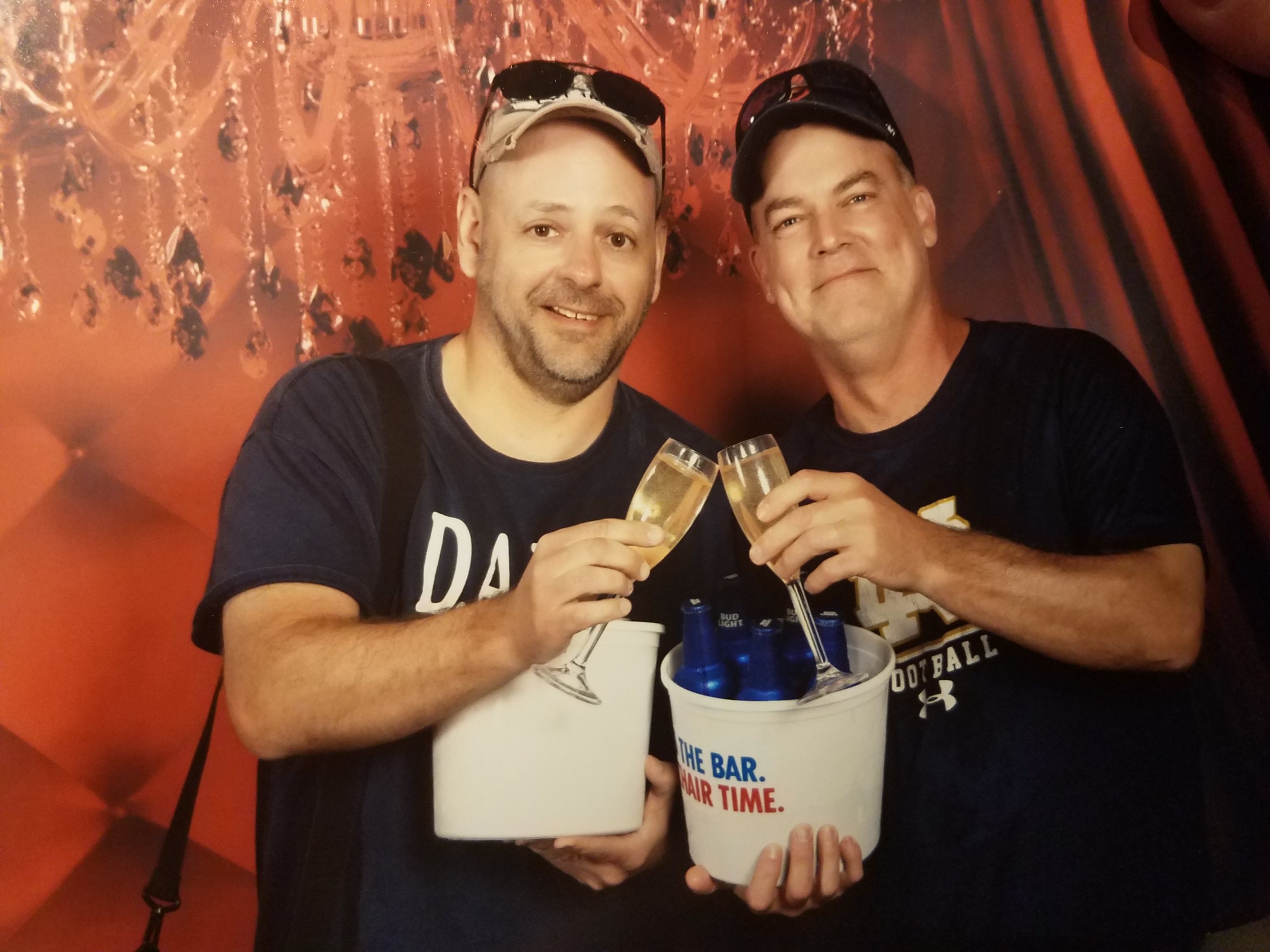 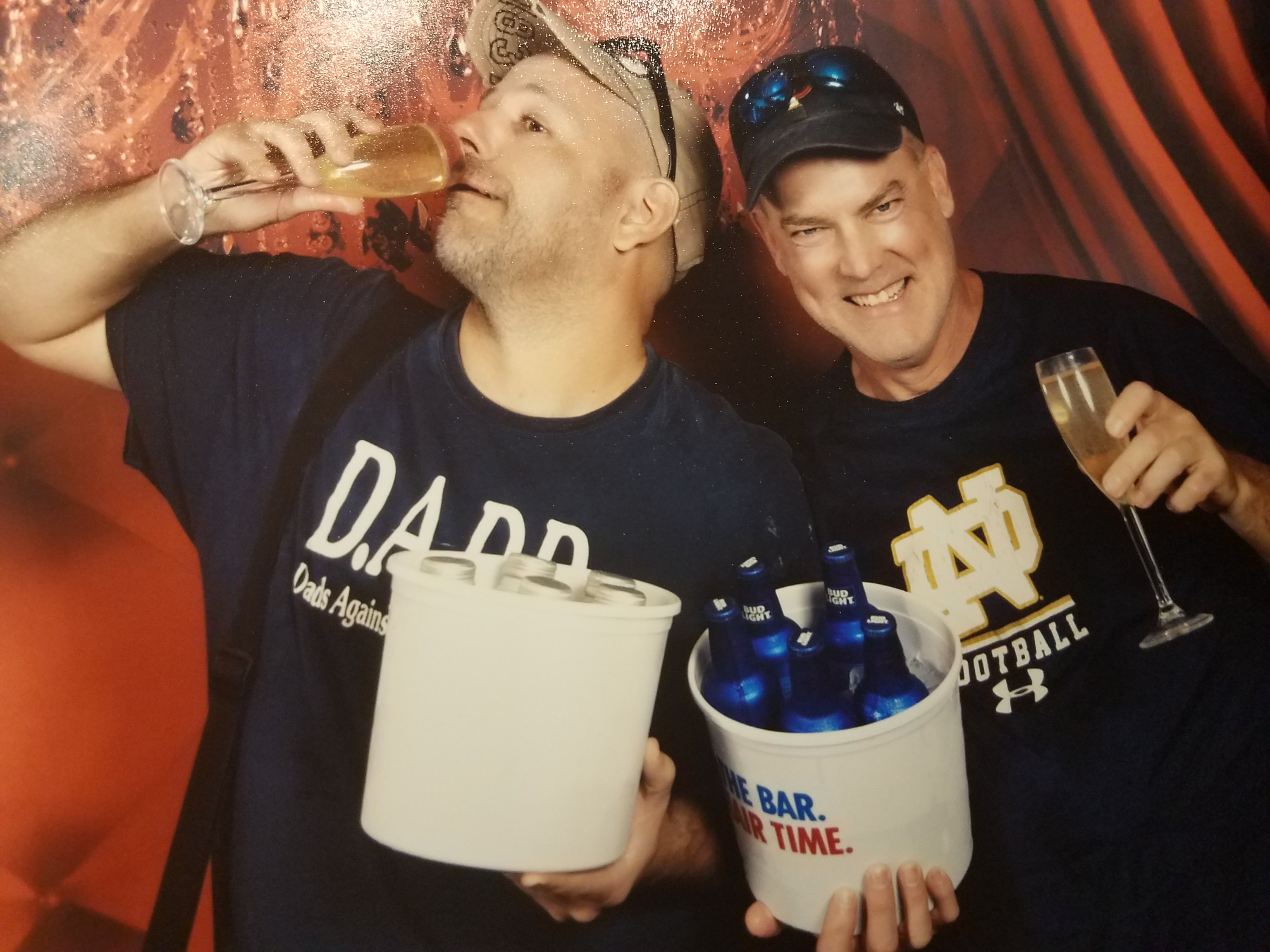 We had a good time! Before we jumped into the tub we had to take some pictures of the Dominican. 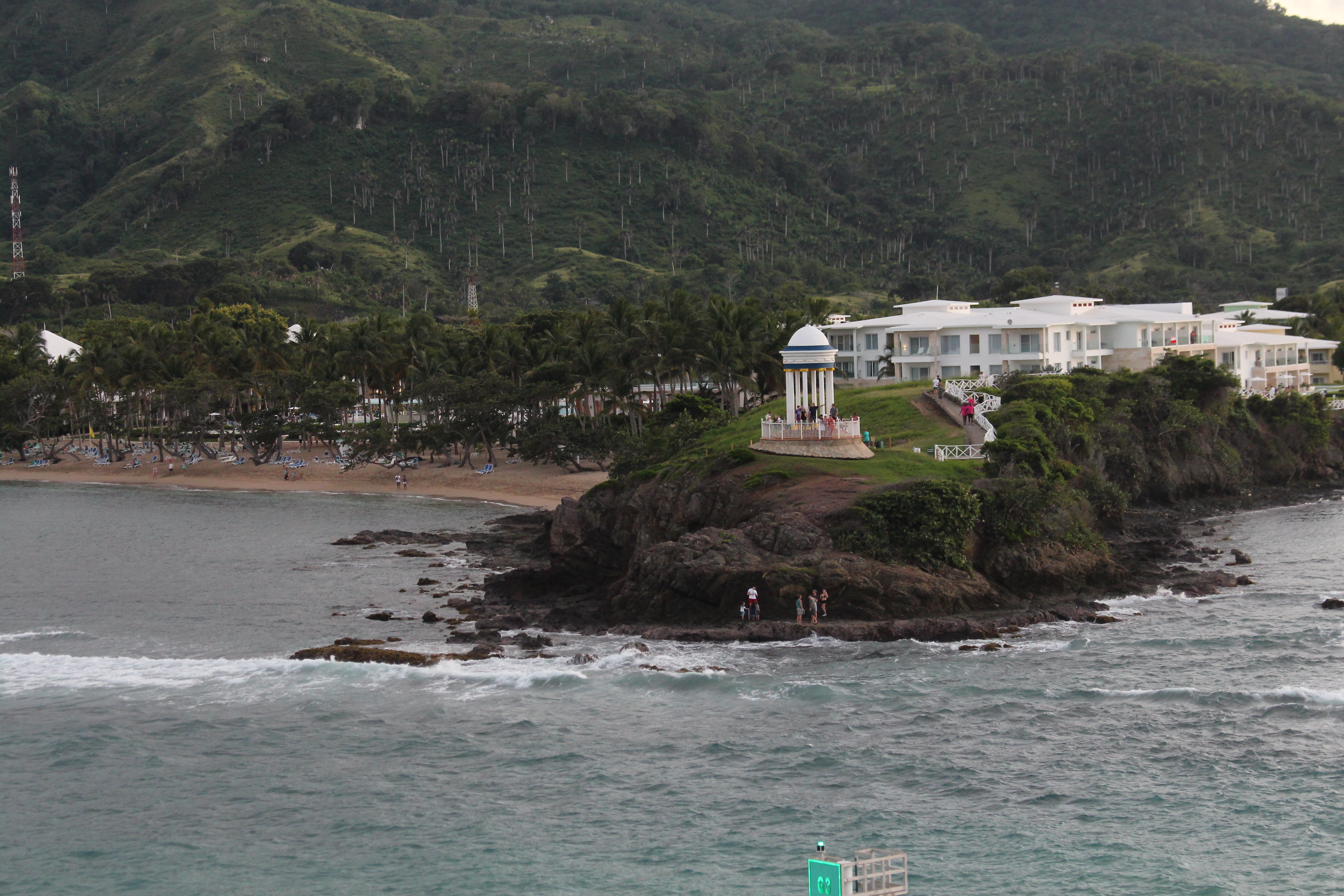 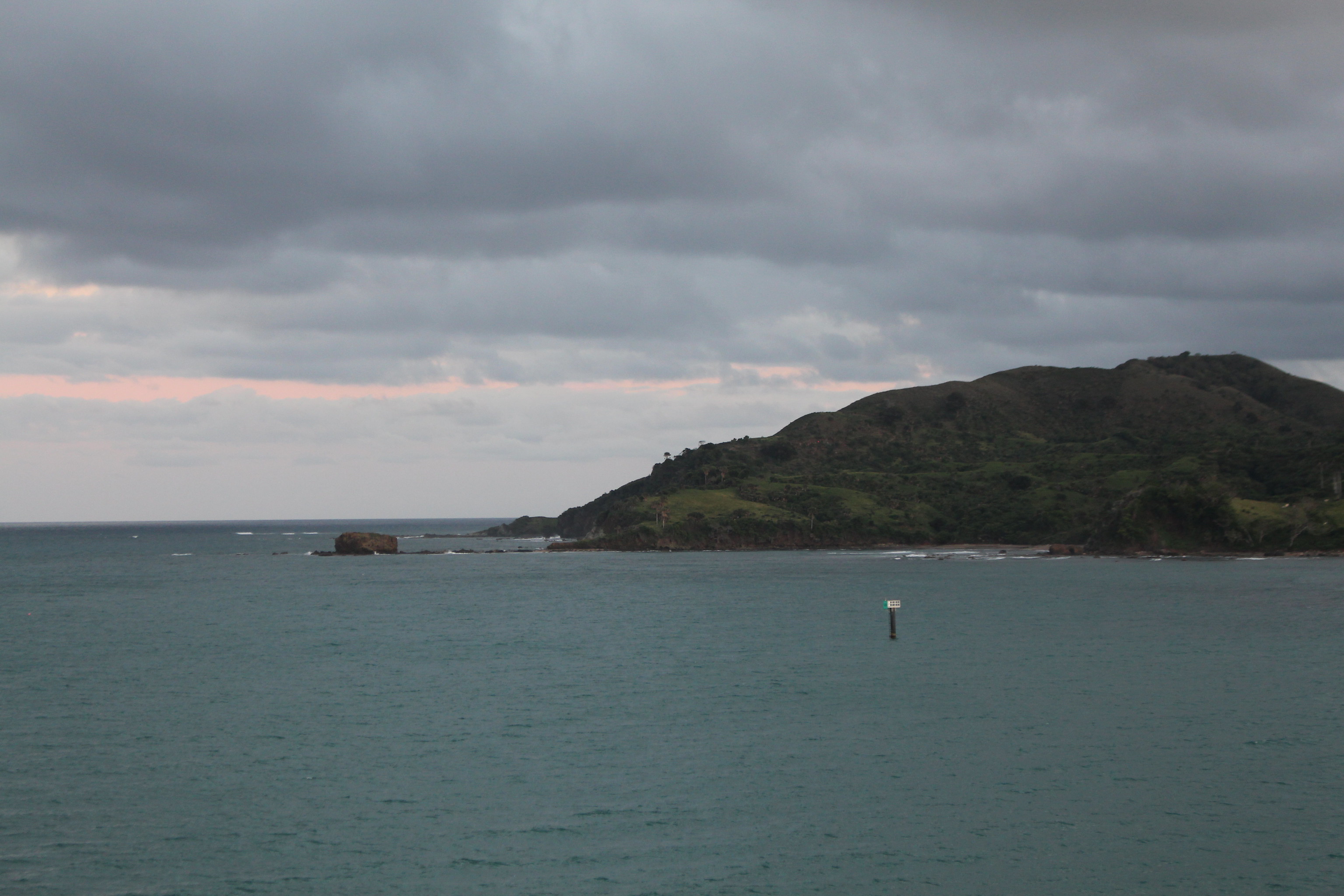 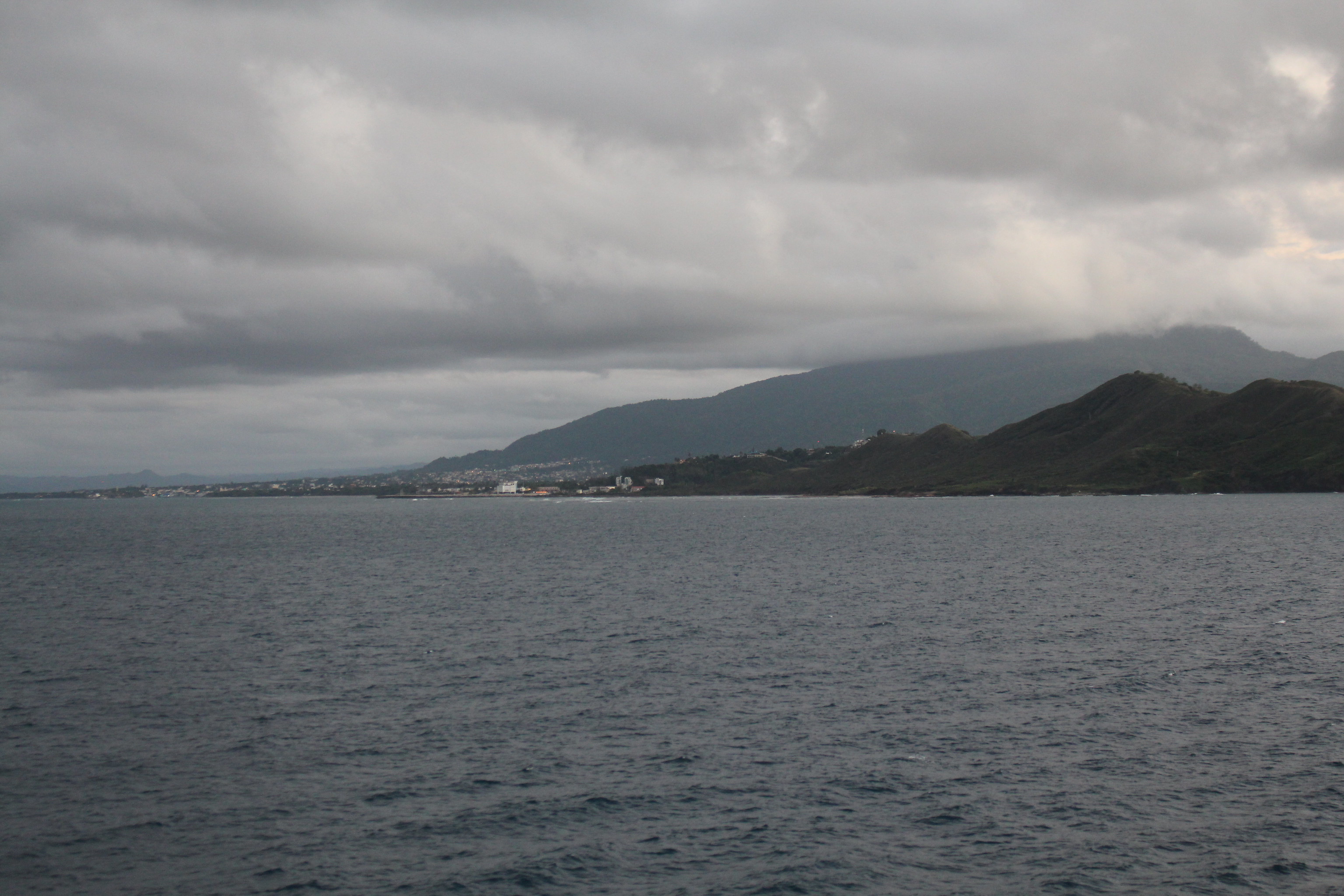 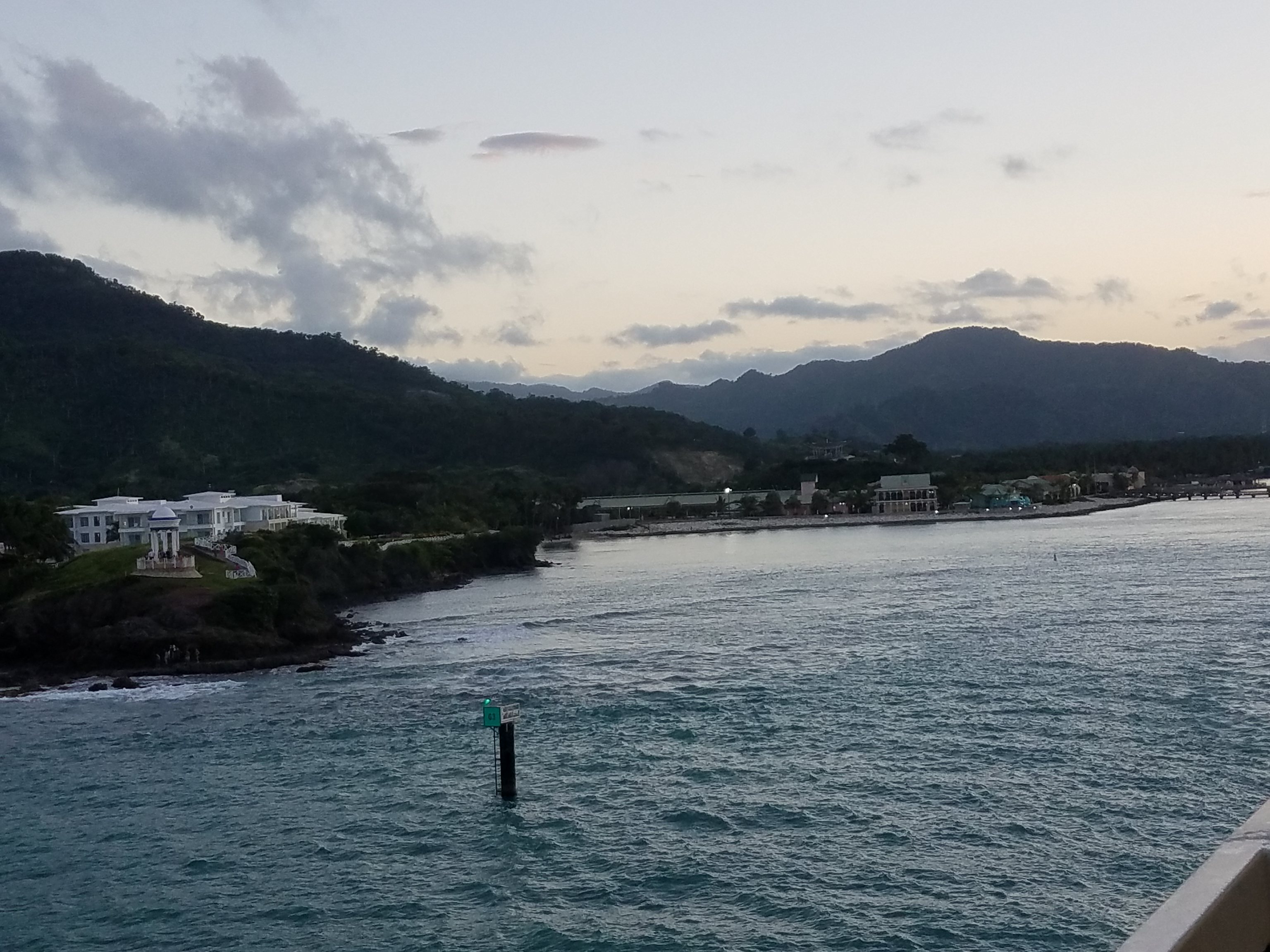 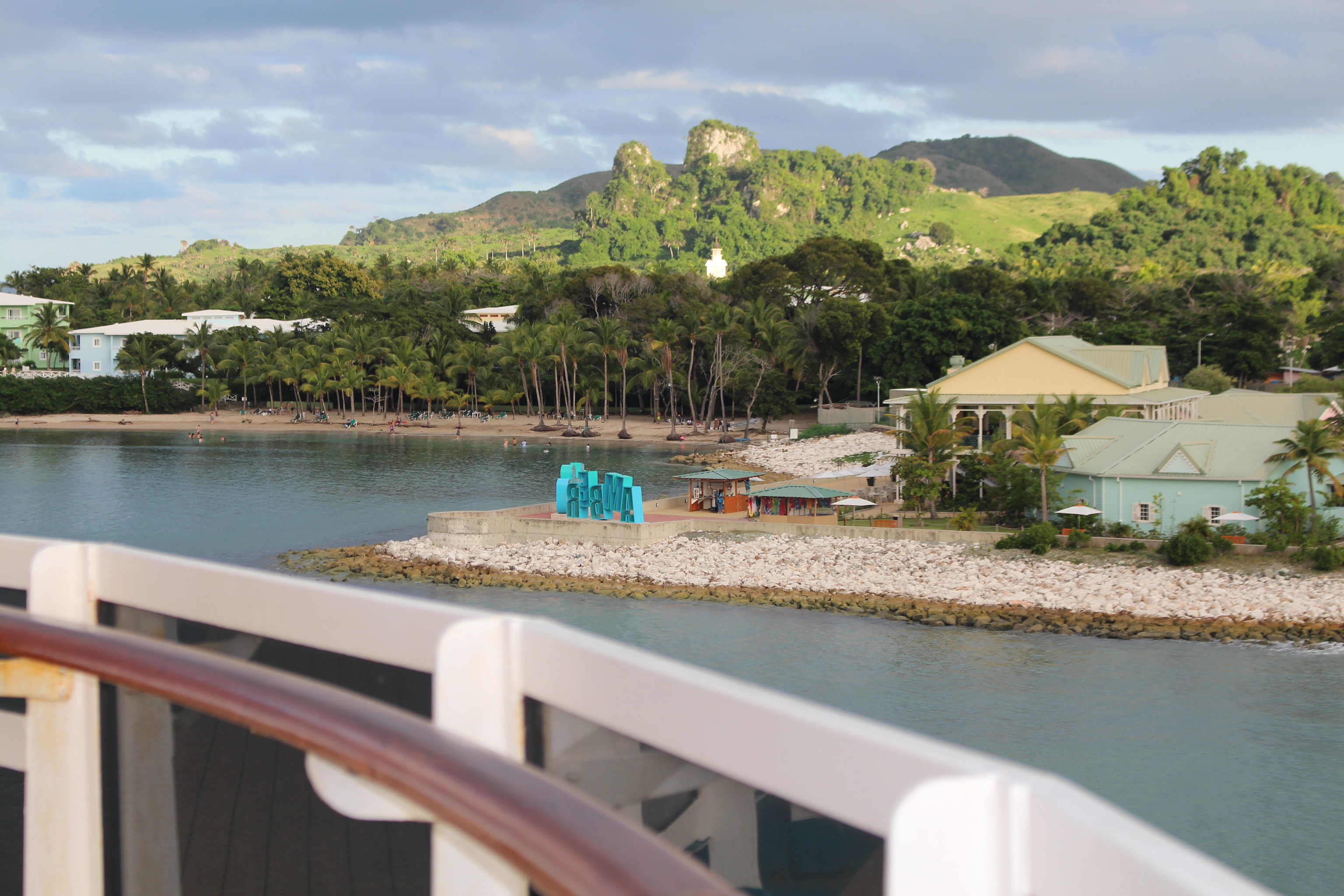 The adults rested and went to dinner just ourselves. Of course tonight was the night the servers all sang so the kids sort of missed it. The 2s and 3s went to eat at the buffet because they wanted to watch the two “Dive-in Movies” They were showing End Game and Captain Marvel. They all said it was awesome just sitting outside and watching a couple of good movies. They had popcorn and blankets but it took them a while to find the popcorn. Turns out it was at one of the bars so they had to go ask for it. After the two movies, the kids heard a lady get up and exclaim “My vagina is about to throw up!” I guess she really had to pee.

Our service was very quick for dinner so we went to the Love and Marriage show. Oh my Lord it was funny, especially the older couple, Marvin and Marlene. Married 60 years, they were hilarious. First question they asked Marvin when he got on stage was what the key was to a long marriage and Marvin simply said, “Sex!” Well that got the crowd rolling. This kept going with Marvin. Asked how many children they had and I believe they had 6 kids to which he said, “we didn’t have a drug store in town”. Not a lot of people got that but we all laughed hysterically at that comment. Maybe we thought it was so funny because others didn’t get it. Another question was the most interesting place they ever had “ice cream” and they both mentioned a particular car. Marvin said Marlene could shut the dome light off with her toe. Funny funny stuff. The middle couple was just uncomfortable. Part way through we weren’t sure if they actually liked each other. She didn’t get the meaning of “ice cream” and…well it was bizarre.

We went to play Wizard at Red Frog even though they were closed already at this point. We then went to see the Booty Shaking contest at the night club. I don’t know why we just thought it would be funny. Well it was hard to see as there was no stage and everyone just jammed together so it wasn’t a lot of fun.

Afterwards we got our nightly pizza and called it night.