On embarkation day we had signed up the 3s for the Green Egg’s and Ham breakfast and today was the day. I was up by 8:30 and decided to go up and see if I could find some chairs to snag before breakfast. I couldn’t find a thing except for when I got to Serenity, the adults only area. There were some chairs under some pergola that offered some shade. I sat there for a bit and laid the towels down figuring, HELL everyone else is doing it!

Breakfast was 9:45am at Northern Lights restaurant. It was the 3s and us four parents. 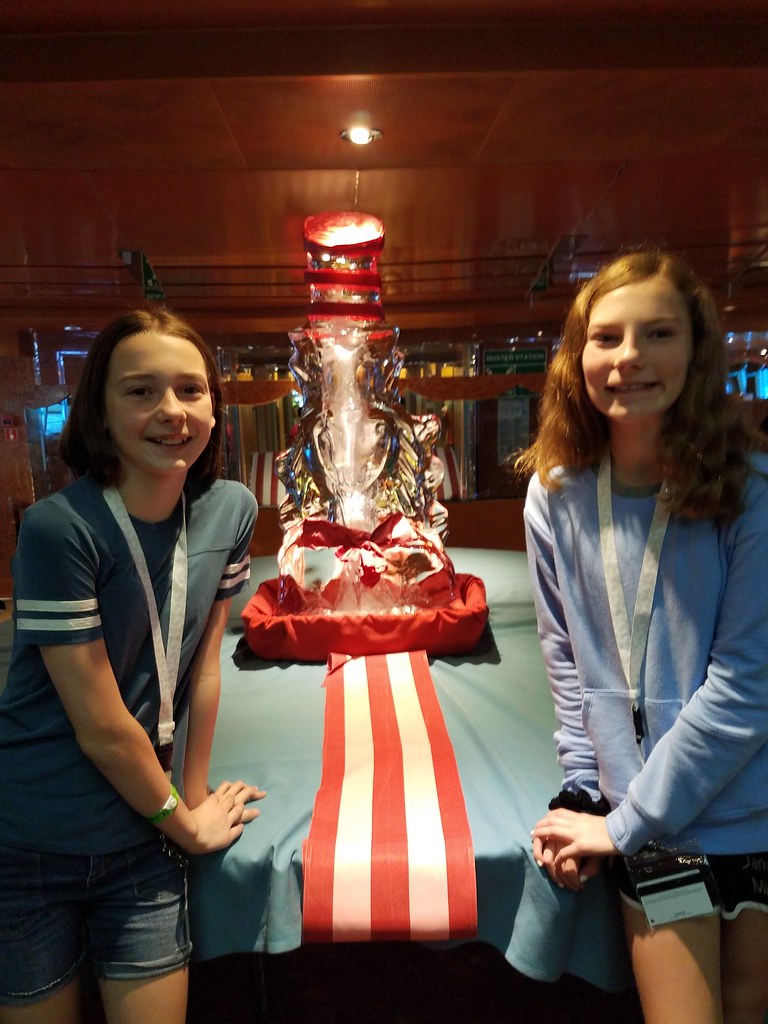 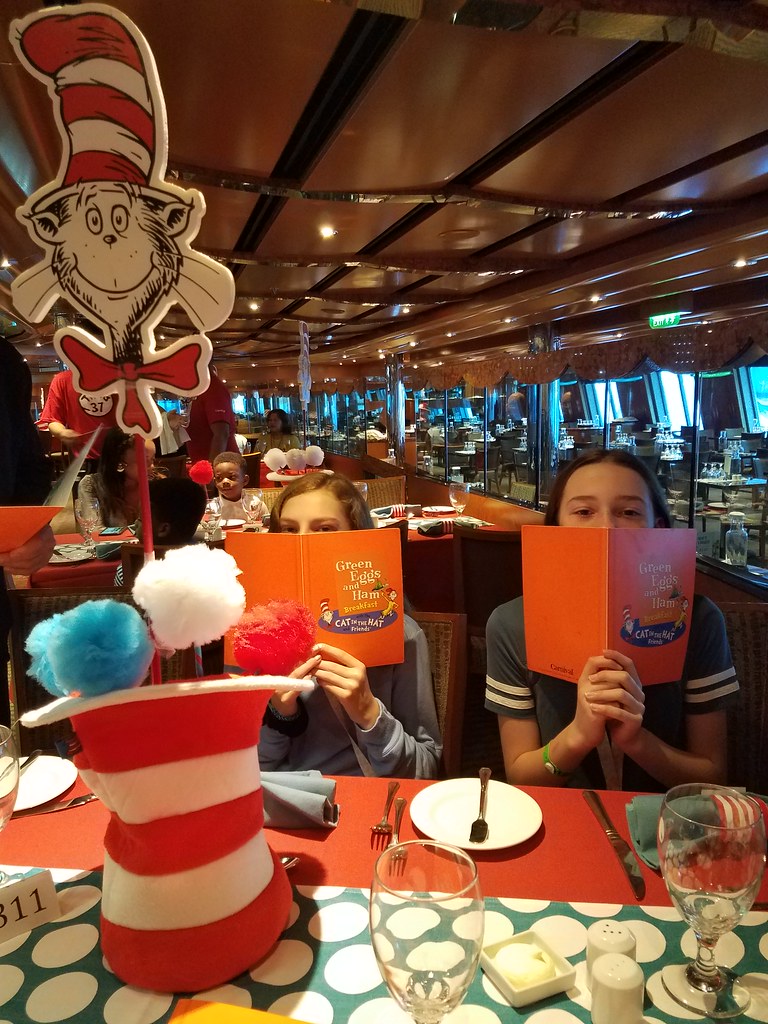 Here are the menu choices. 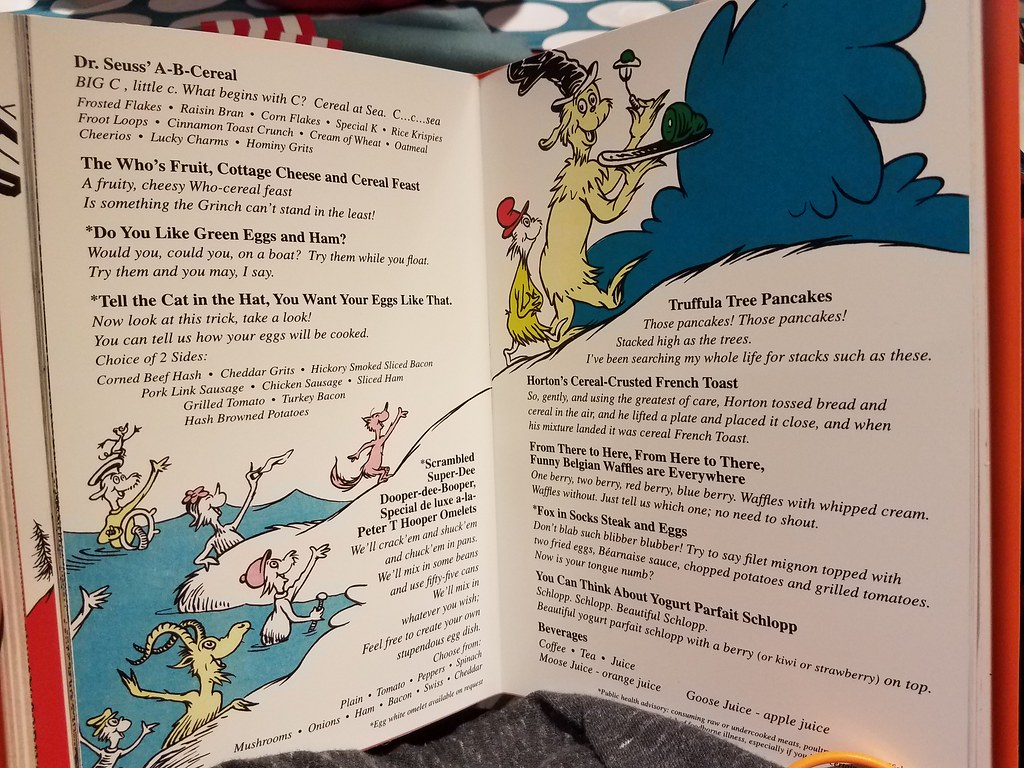 Everyone got a parfait to start! 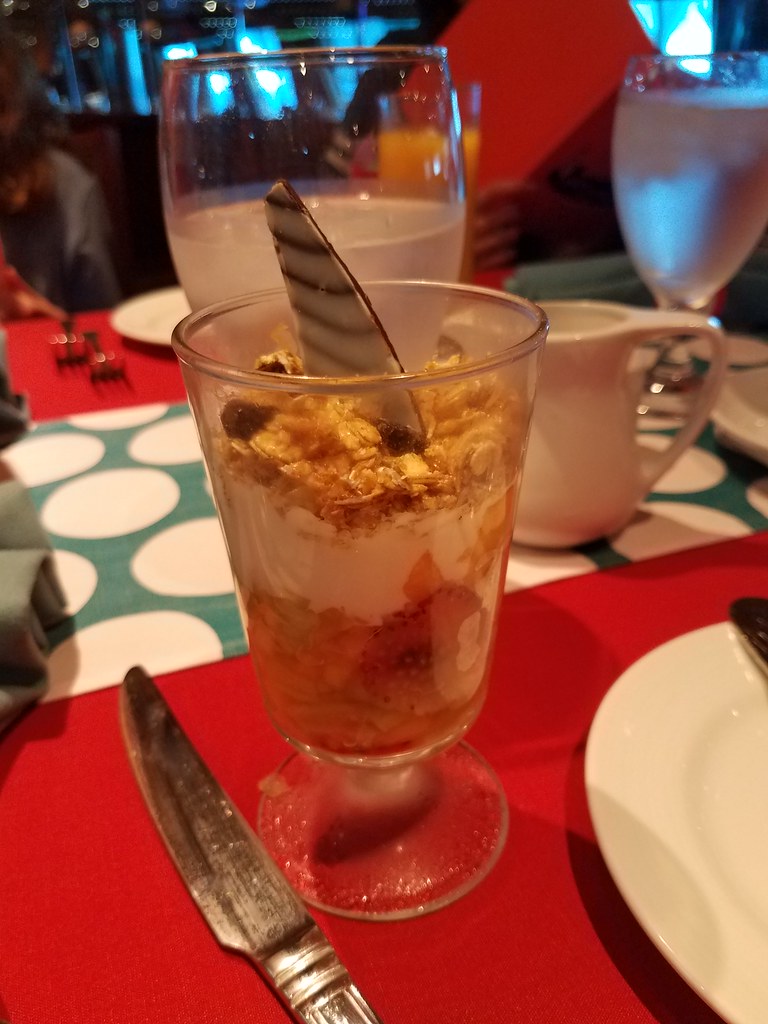 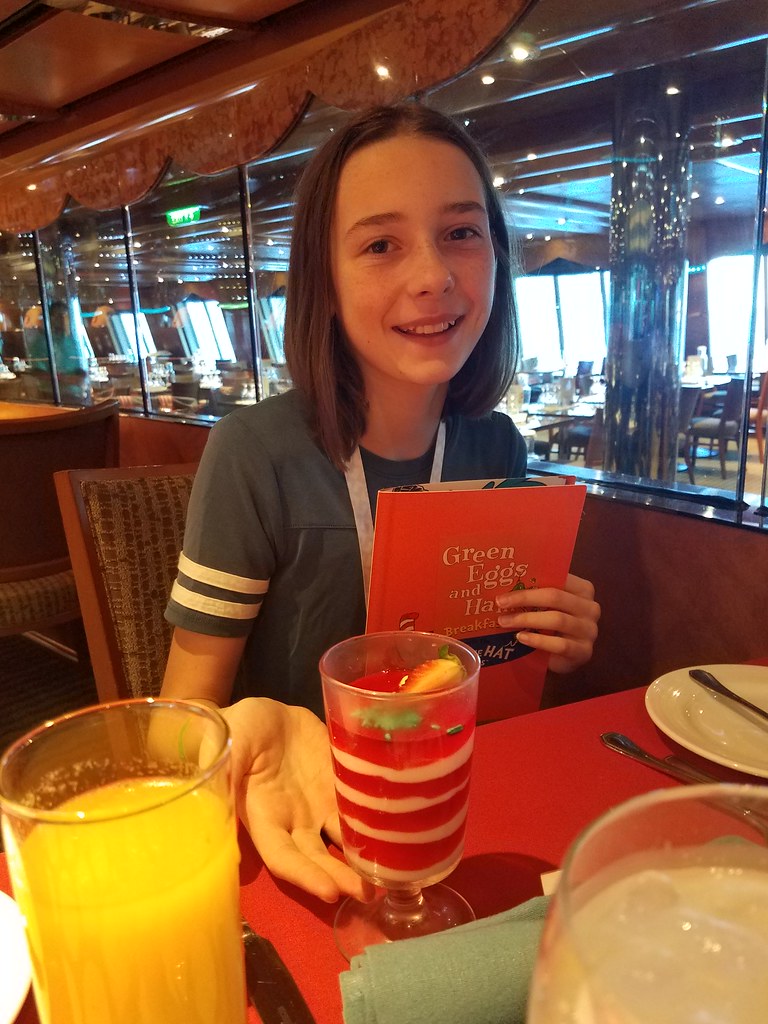 Sophie and Kate ordered the Green Eggs because…well you almost have to! 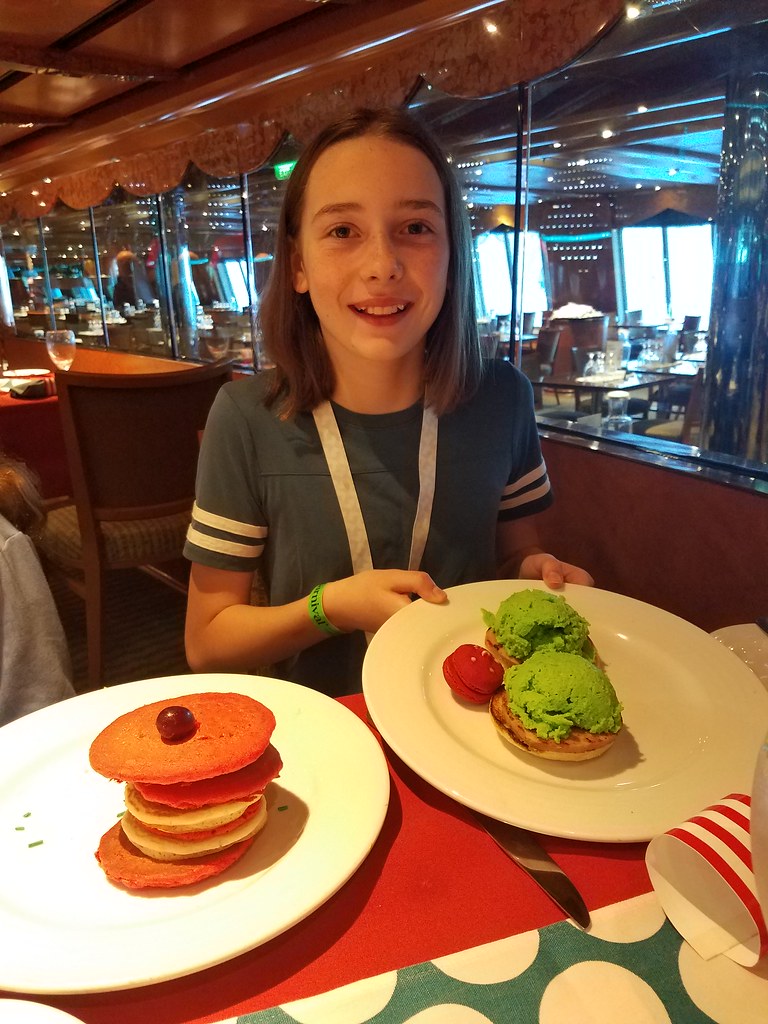 We had already paid for the breakfast so whatever you ordered was essentially paid for so I figured I would order Steak and Eggs! 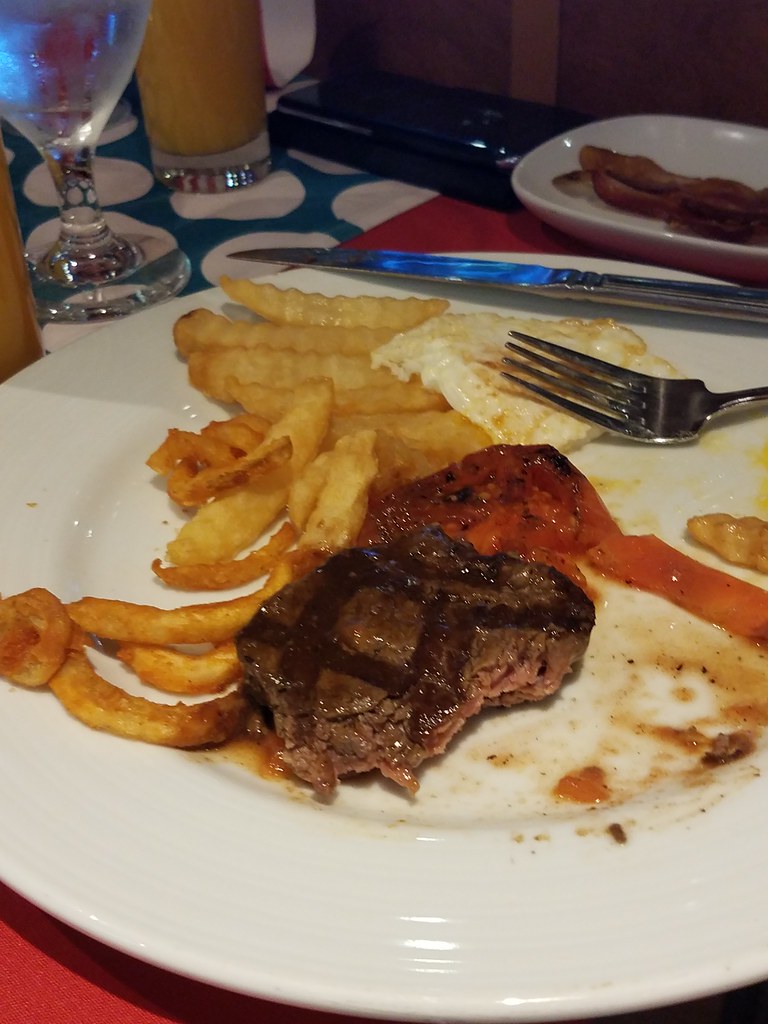 The waffles were interesting with the colored butter. 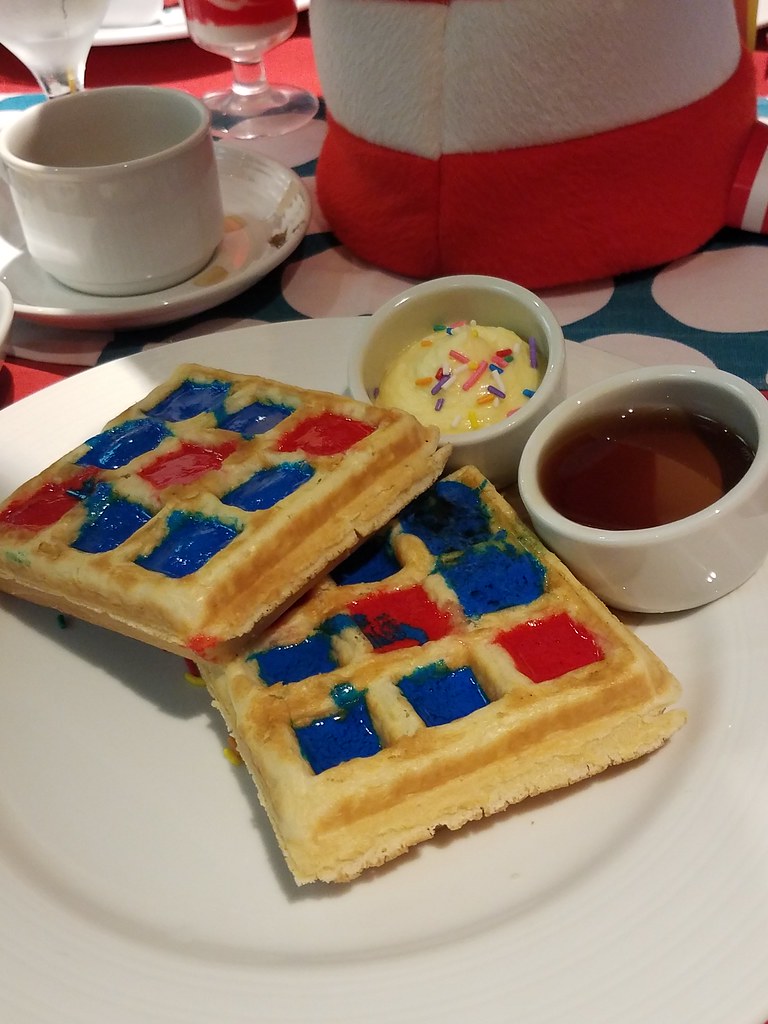 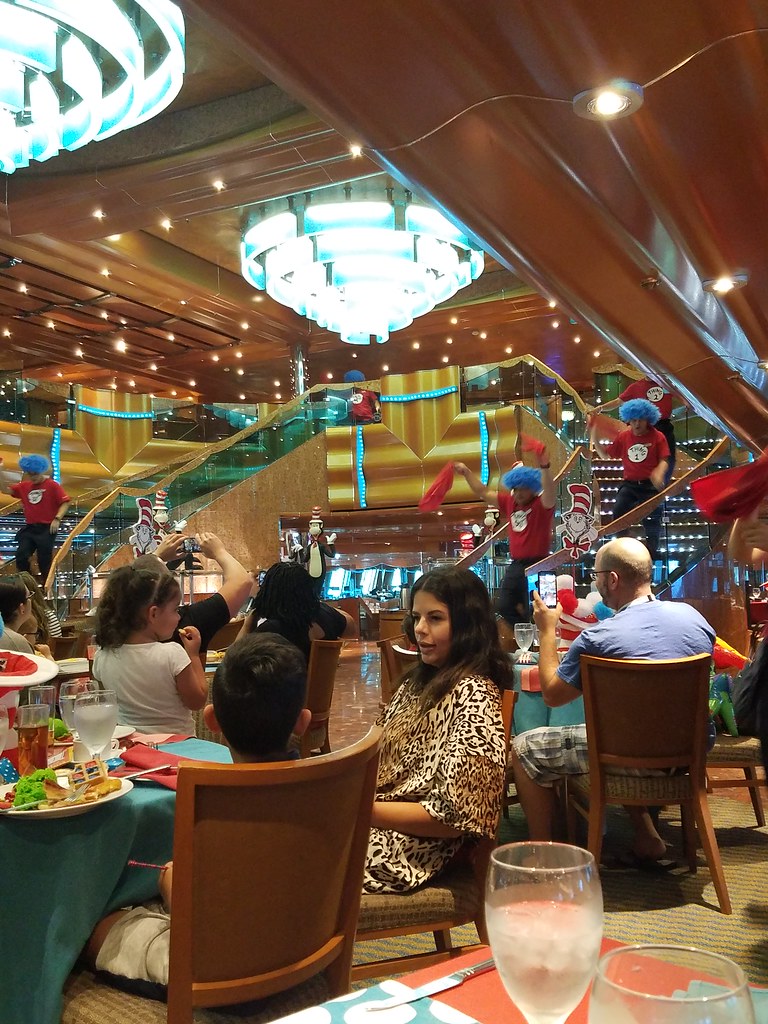 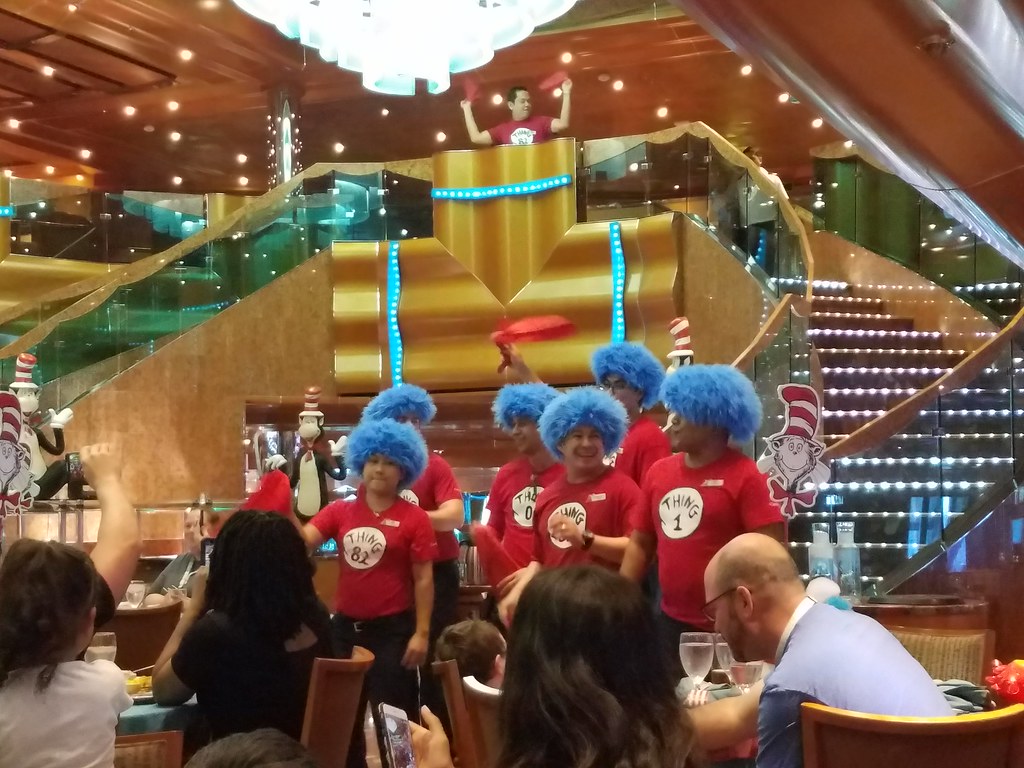 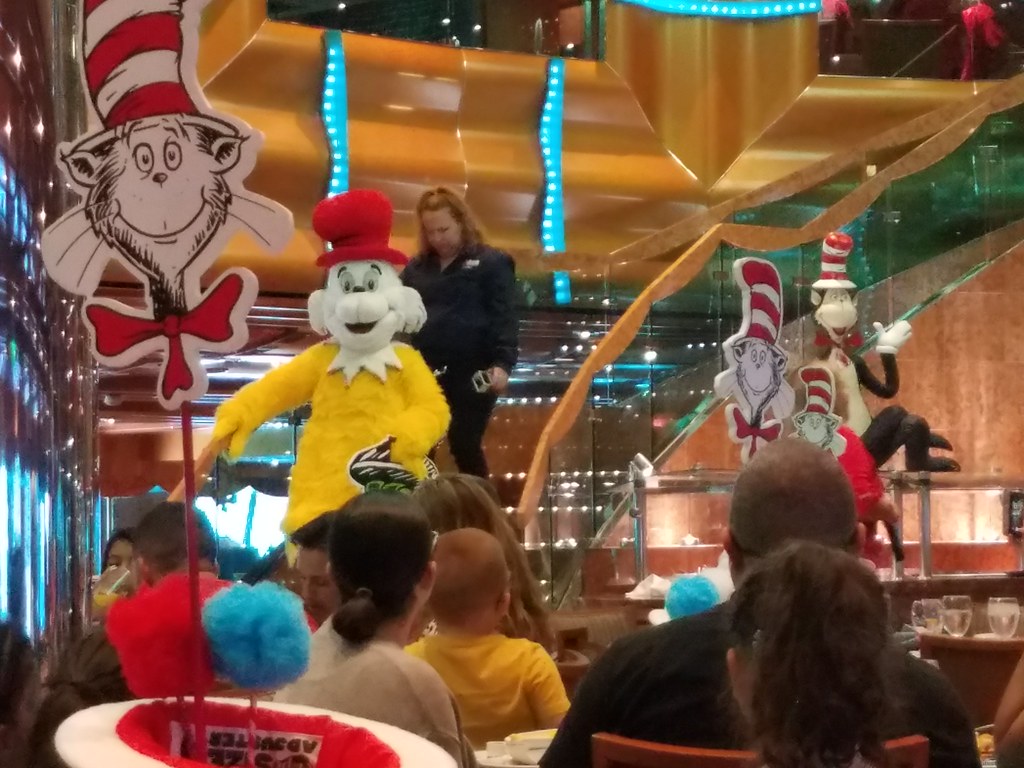 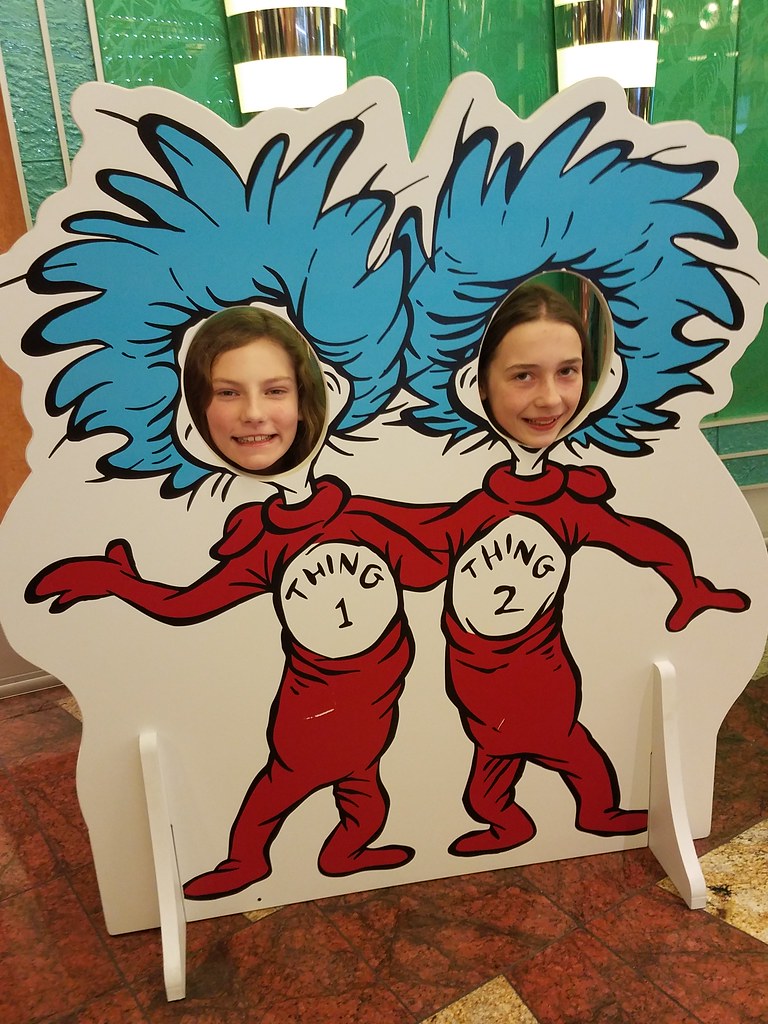 Afterwards, Chris and I went to the debarking lecture in the theater hosted by Simon. This would be our third time doing this but I will say there were some helpful hints that he gave us as to how things would go tomorrow during debarkation. It took about an hour complete with introducing a bunch of people that may have made our trip a good one from meals to room stewards to the fun committee. One bit of funny is while Simon is a good cruise director, sometimes I question his wardrobe as this time his pants seemed to be hiked up and his shirt tucked in real tight in the front. I normally don’t notice such things but it had become a thing for us over the course of the cruise so of course I noticed. While this little lecture was helpful, I do wish it was shorter, especially for those of us who may have been on a cruise before.

As soon as this was over Chris and I went right up to Serenity to claim our chairs again. They were gone and people were sitting in our chair. By this time I was probably gone about 2 hours. Normally I do not like to do this but given how the other sea day went, I was still mad so I didn’t care. Now to come up and have my stuff removed…I was ticked. We came back around to the people sitting in our chair and asked them if they knew where our stuff was. They said there was a sticker on the chair and the sticker said the staff removed our stuff. Why our stuff? There were plenty other chairs around the ship that didn’t have people in them! Well, come to find out, Serenity is one of the only places on the ship that seems to look if people are in their chairs. We found our stuff with the attendant. Heather and Linda jumped on some chairs in the shade when people left and I found one in the sun. It was so hot that I only lasted there maybe 30 minutes. This was one of the only cruise we’ve been on where there was no wind on sea days. Normally the wind relieves the heat but there was none so it got warm!

I was the last one in line. As I was waiting I texted the crew that they may want to come to the pool area. They came and watched from the deck above. As I was waiting for my turn I told the assistant cruise director before I did my thing that I was going to do my best Chris Farley impression. And that’s what I did. The judges were “grandmas” and there was some confusion as to what they were supposed to do as to who they were saying goodbye to and who would move on. Thankfully with some big help from the crowd, I moved on to the next round.

Here is Kate and Sophie watching me make a fool of myself. At one point Kate consoled Sophie by putting her arm around her. Ella and Leighton were also watching from another vantage point. The 1s completely missed it. 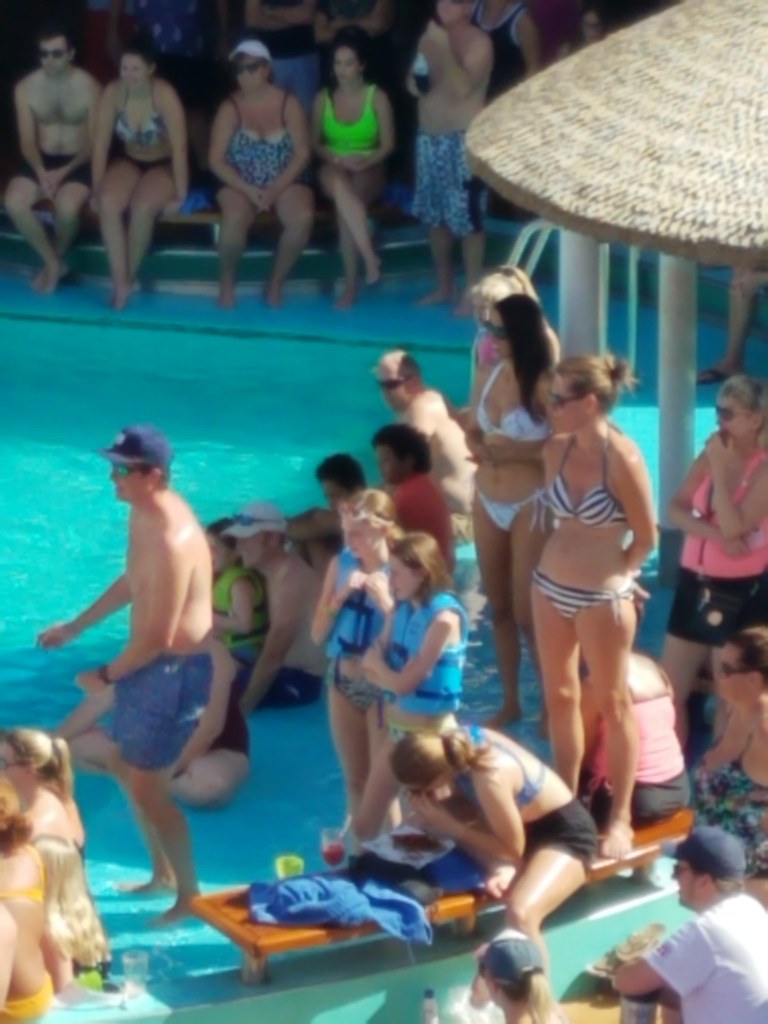 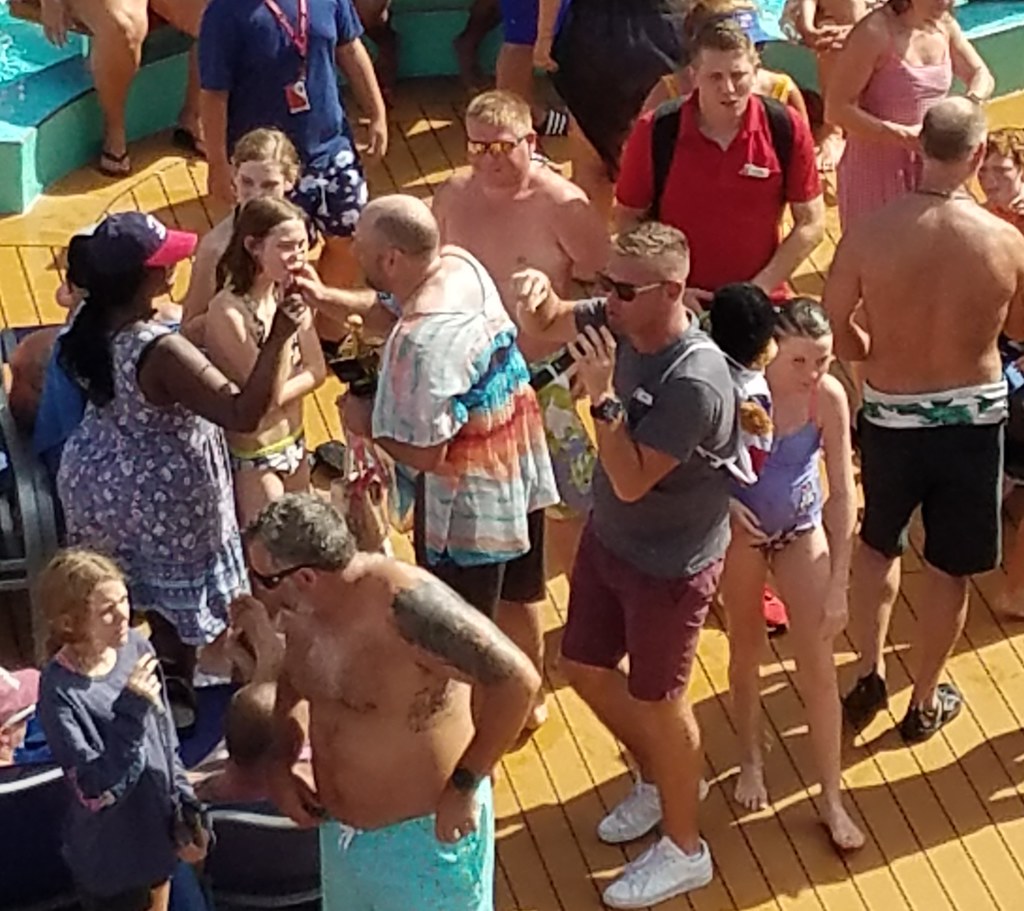 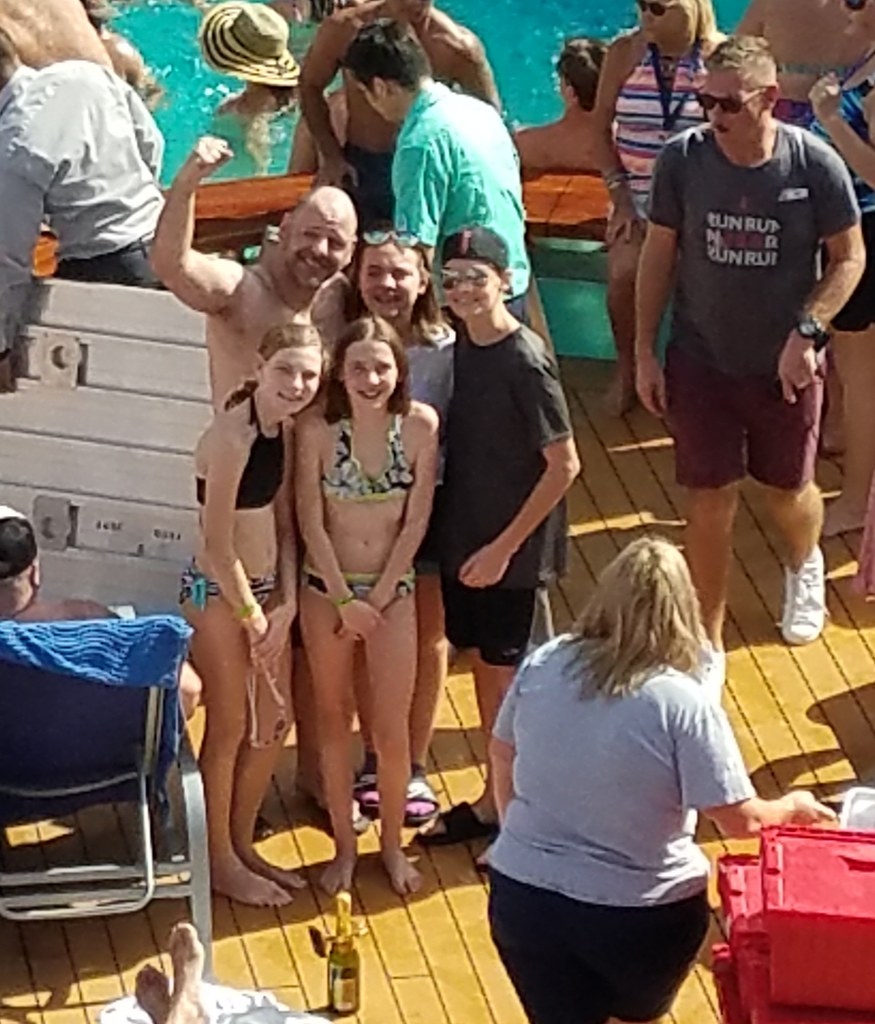 I won!!!!! First winner of 2020 on the Carnival Magic…actually of the new decade! 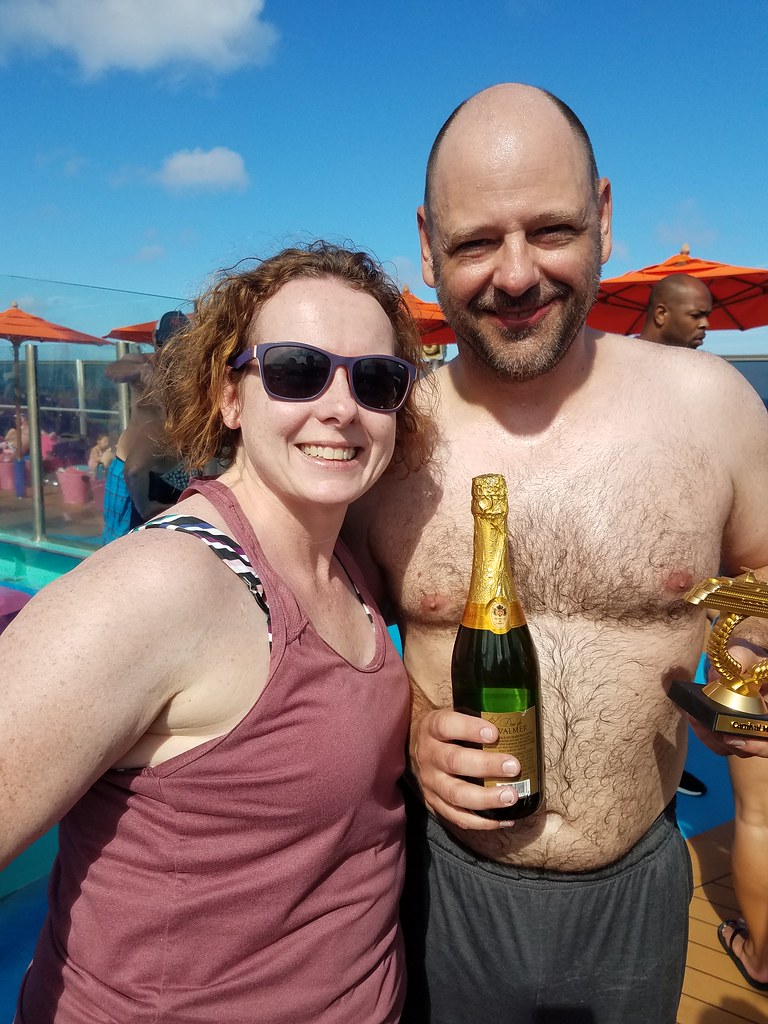 Here is the video Ella took of the moment I won. It’s more cute hearing her commentary as you don’t really see much of me.

So there is a full video that Heather took with her phone from start to finish. Maybe, if you know us, and you are lucky enough and remember to ask her, just maybe she will show you some day. As for the rest of you, I’m sorry, you’re out of luck.

People had high fived me and another said I had all his wife’s clothes and wanted to take a selfy with me before I gave it back. After this was when I met a lady from Aberdeen and that’s when realized the guy I thought was going to kiss me New Years Eve was a meteorologist from there….her husband.

So it was warm and I had worked hard, I really needed a beer. Chris took my winnings downstairs and got the beers we bought from Red Frog out of his fridge. It tasted fantastic! We ate a little, I finally got a burger from Guy’s Burgers, Leighton finally got his BBQ.

We were able to find loungers by the pool by this time so we decided to order some drinks. 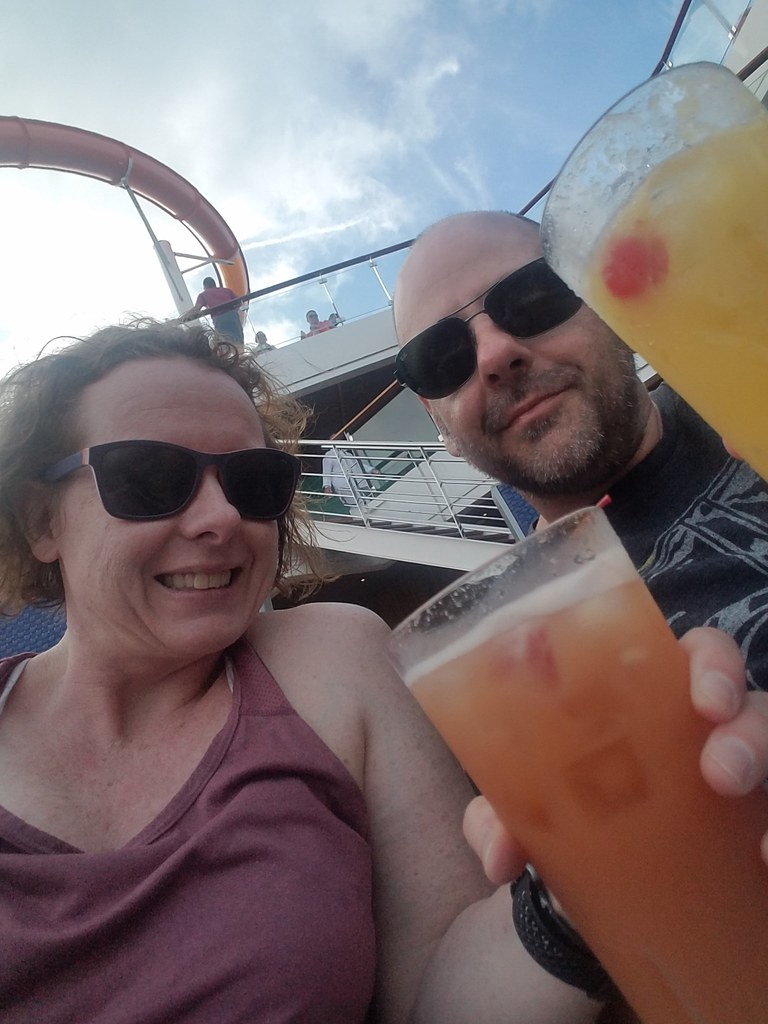 Last one of the cruise. 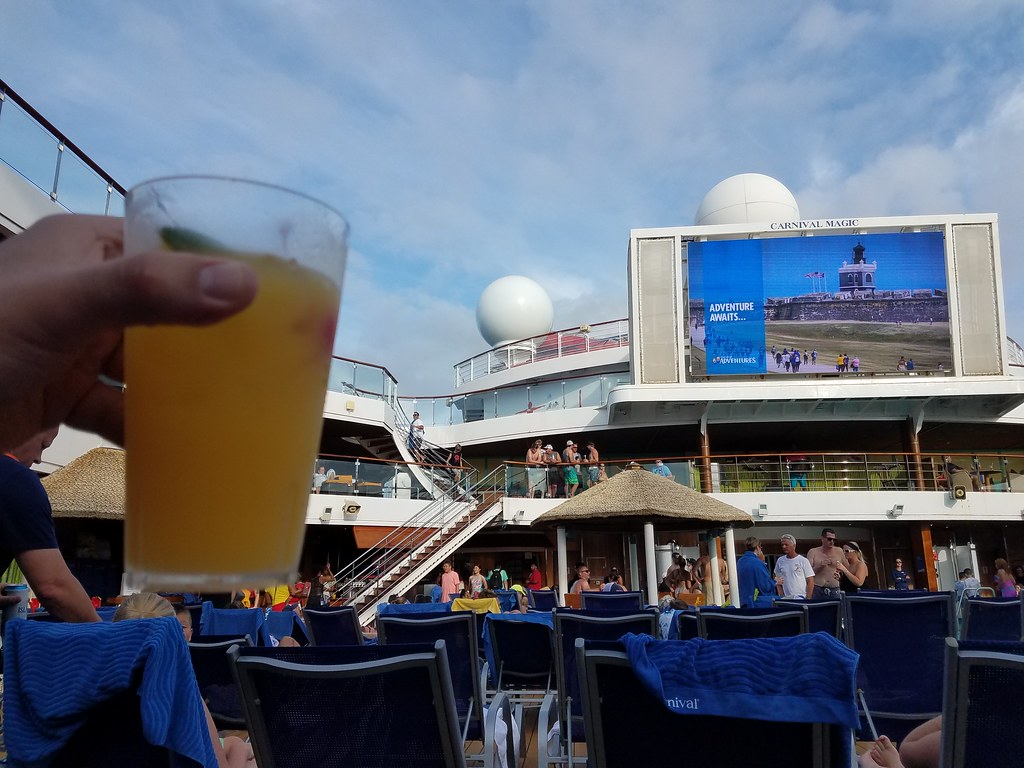 Linda went looking for 3s and also for Leighton’s sweatshirt that he left at the kid’s club. We showered, I rested while heather packed and went to our last dinner together. 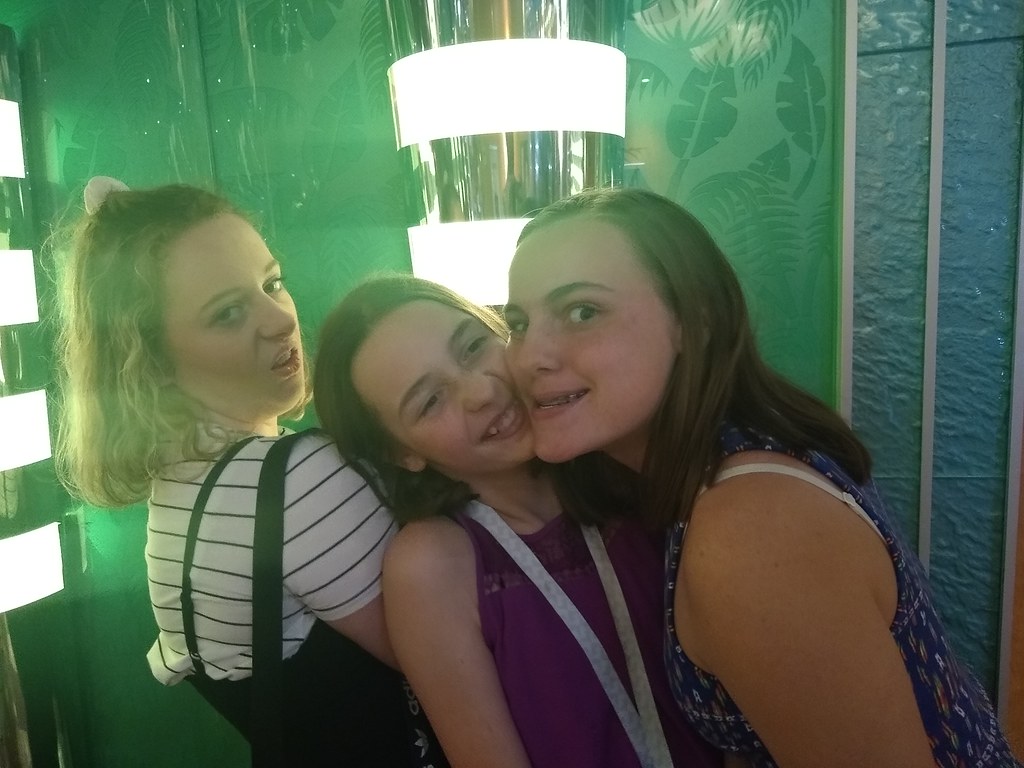 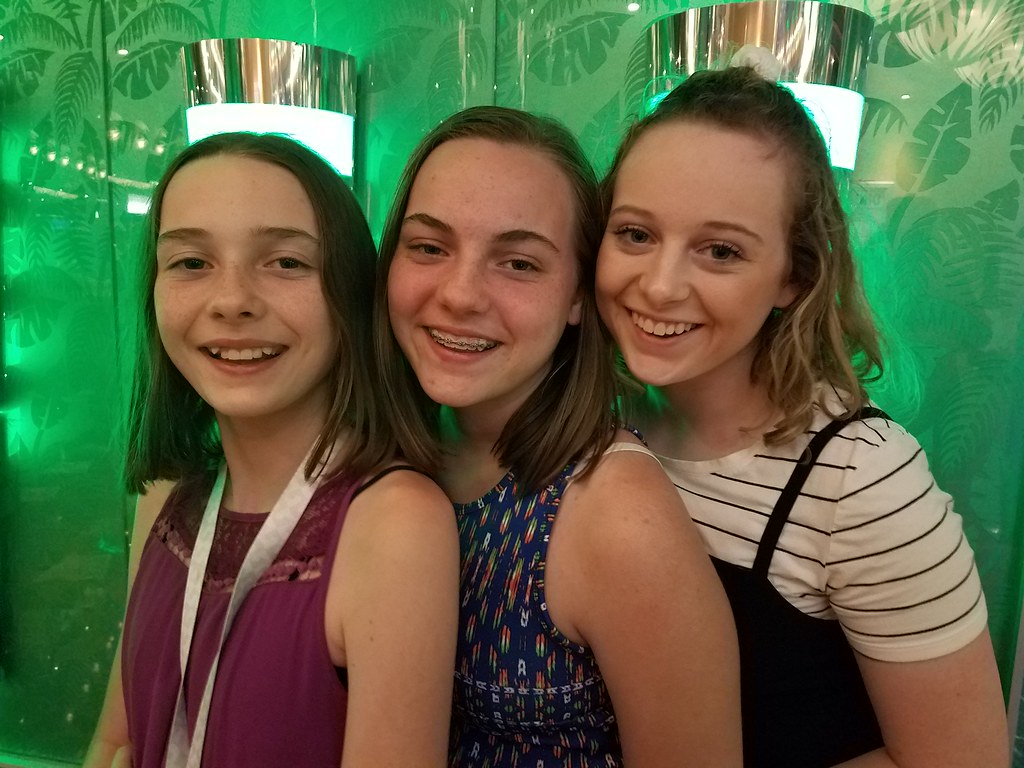 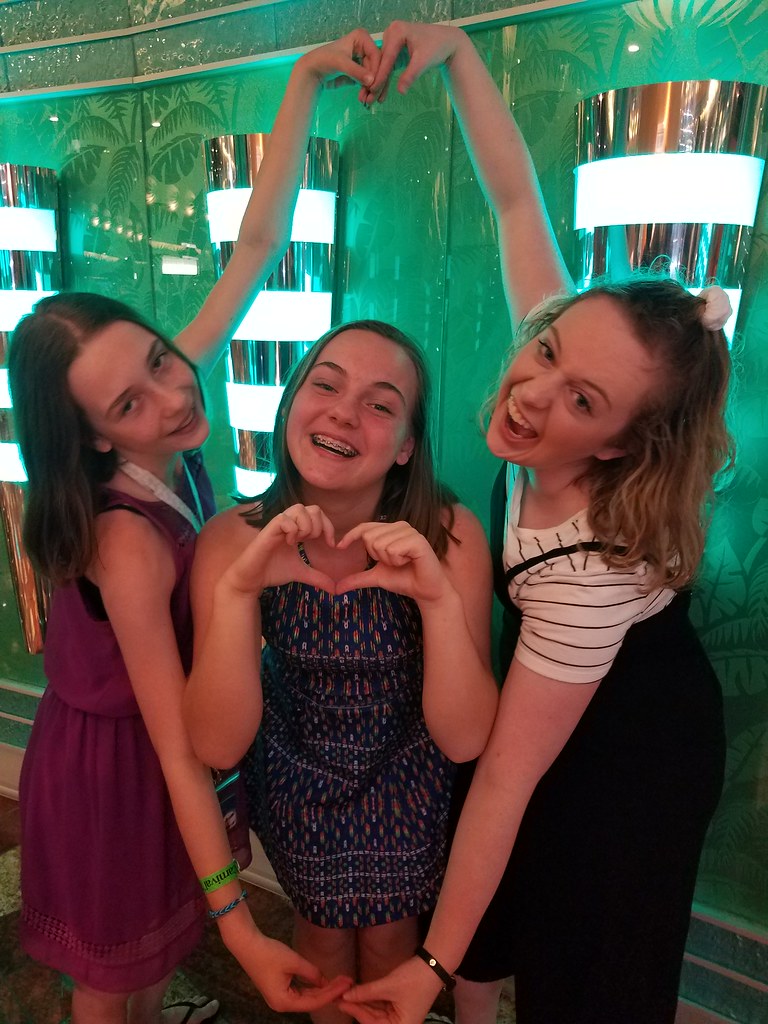 We sort of got split up with kids and adults but actually we were right beside each other so it was OK. I like what Carnival does as they get all the servers together and sing a “goodbye” song. Didn’t hit me like Disney it still hit me a little. 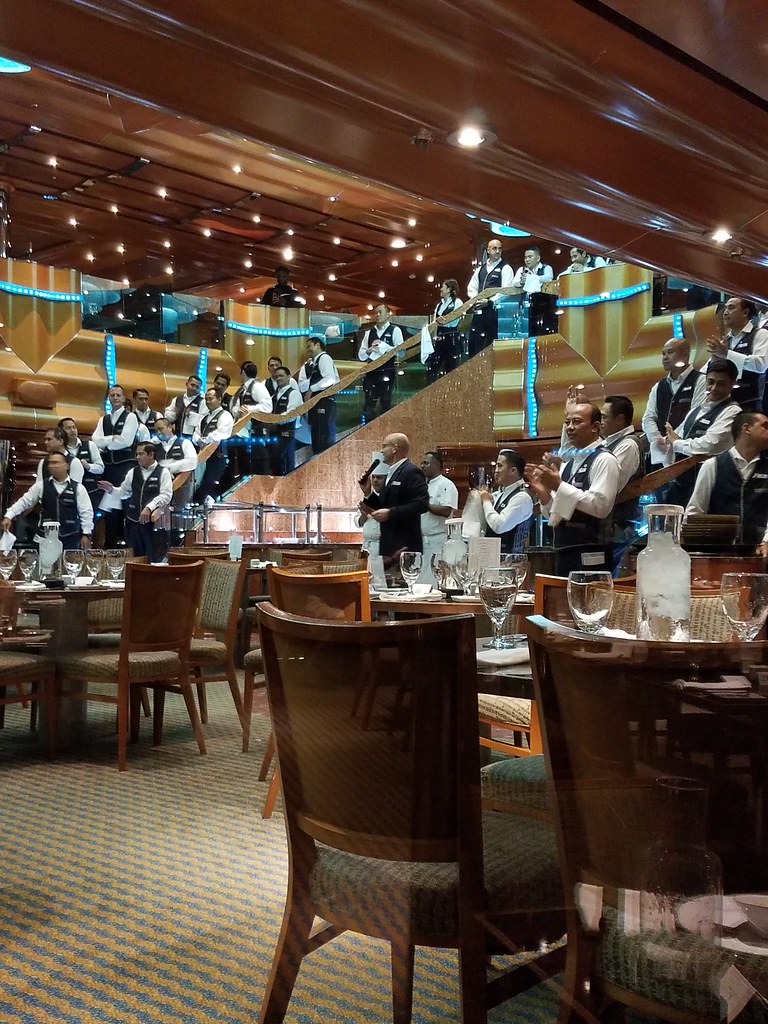 Tomorrow will be Kate’s birthday so they asked if she could get a cake or something and of course they obliged and sang happy birthday. At first there was some confusion between wanting more mashed potatoes and and cake but eventually they got it figured out.

We went to the PG version of comedy. Again the guy was at his best with people on stage with him and I’d say it was borderline PG as he stretched it, but it was good. We actually had to grab chairs from Red Frog and move them around in order for enough of us to sit.

After the wives went to pack some more and Chris and I sat and listened to the High C’s and the Shredders some more. Chris decided to plop right by a young lady sitting by herself. Like Chris does, he manages to strike up a conversation. Turns out, she’s had some of the same ideas as we have as we were people watching throughout the cruise. So it was good to know it wasn’t just us.
For instance the one lady it seems everyone noticed. She would change 3 times a night and would wear either very elegant gowns or very short miniskirts. She’s actually in a picture above by the pool beside Kate and Sophie. She was hard to miss, even the lady we sat by noticed her throughout the cruise. Again, glad it wasn’t just us.

We went to comedy at 11:30 and he wasn’t very good because he didn’t bring anyone up this time. After, we ate and had the champagne I won…which wasn’t very good. By the time we got back to the room, everyone else was back as well. Time to say goodnight for the final time.

Next: Debarkation, Tips and Notes about our Carnival Cruise.