We drove to Minneapolis on Friday the 27th of December. I usually take a few shots to show what we were about to leave behind. 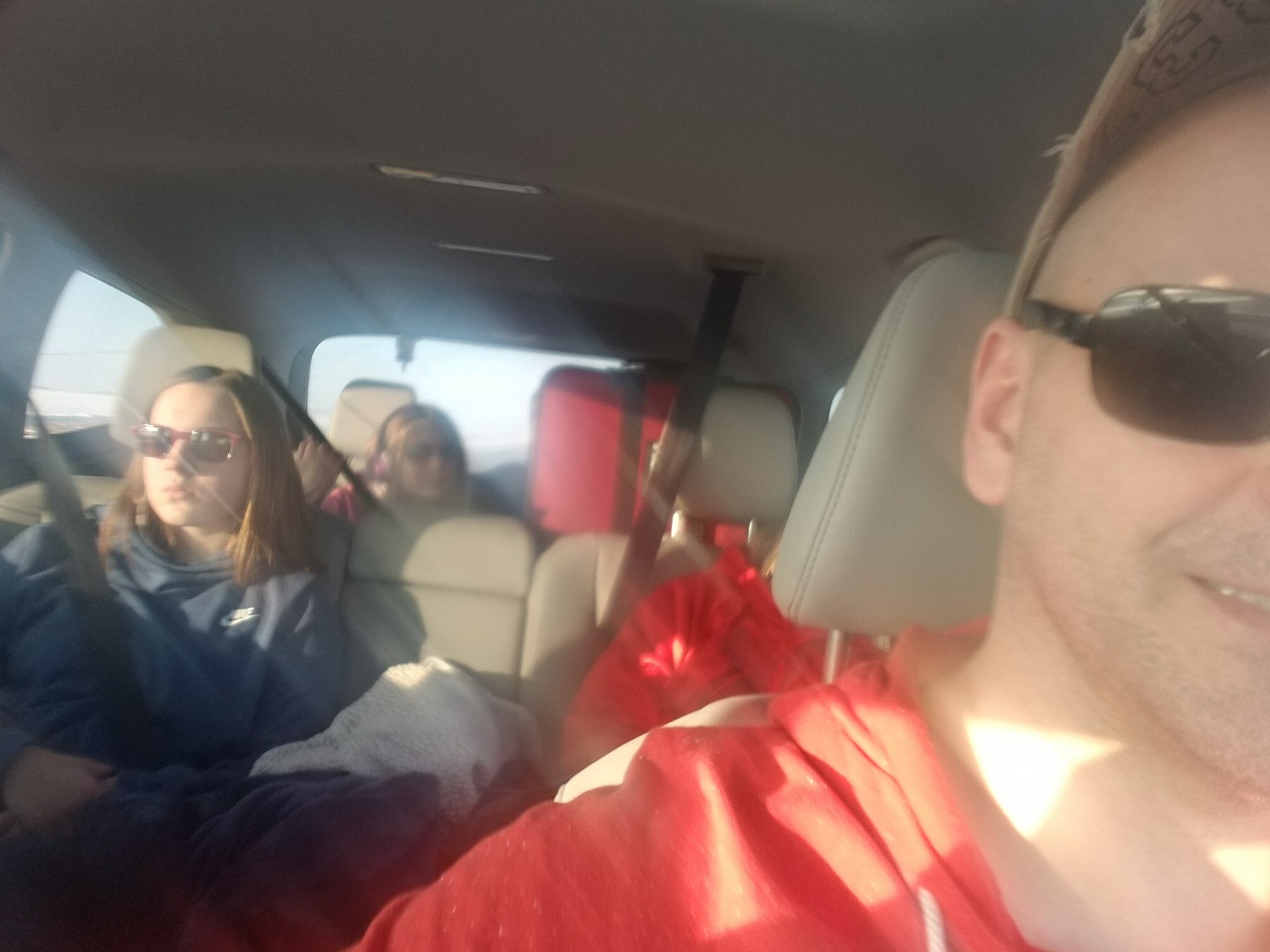 Got to Augers around 8pm and went to bed fairly early. We were set to fly out at 7:40am on Saturday and we decided to get there around 2 hours early if we could. Lucky we did because it started to rain at 5am…Freezing Rain. It was getting a little scary, especially as we tried to go down the off ramp by the airport neither us nor Chris knew if we could navigate the turn. Of course this also shut down the airport for a while. There managed to be a break in the rain and temperatures were right around 31F and they started to release planes again. We were 2 hours late but managed to get out on Sun Country. When we landed in Miami we saw all sorts of bad pictures on Facebook. People in the Cities not making it up ramps and everything stopped behind them. A school bus pulling a trailer sliding sideways down a street with NO way to stop it other than once it hits something. We were so lucky to get out when we did! Trip Insurance People!!!!

OH! Let me back up! The lines for both Sun Country and especially the TSA were long. Really long! It was a smart thing to leave so early had everything run on time we would have been pushing it had we showed up an hour before. The TSA had a long line to get to the drug sniffing dogs. These people had been working their jobs for too long. The first one was telling to get in two lines and keep walking cause if we slow or stop they have to stop the whole thing and start over and pay attention to what’s going on and blah blah blah. Sheesh was wasn’t in a good mood. So two lines and someone tells two people when to walk through and a dog walks behind as you walk. We understood it. Our kids understood it. Apparently some lady behind us didn’t figure it out and ran past and that upset the TSA and they had to start over. The lady got angry, glad we were past by that point. Miami had it better where the dogs just walked past you while you were in line. Much more efficient.

So we’re off. Sun Country has WiFi you can log into for free and watch shows and movies right from your personal device. Cool concept right? Except Androids really seem to struggle with it and even iPhones at times. Linda and Heather both had about 30 minutes left in their movies and lost connection and was never able to finish. I never could get anything going on my phone. Like the idea but still has a way to go. 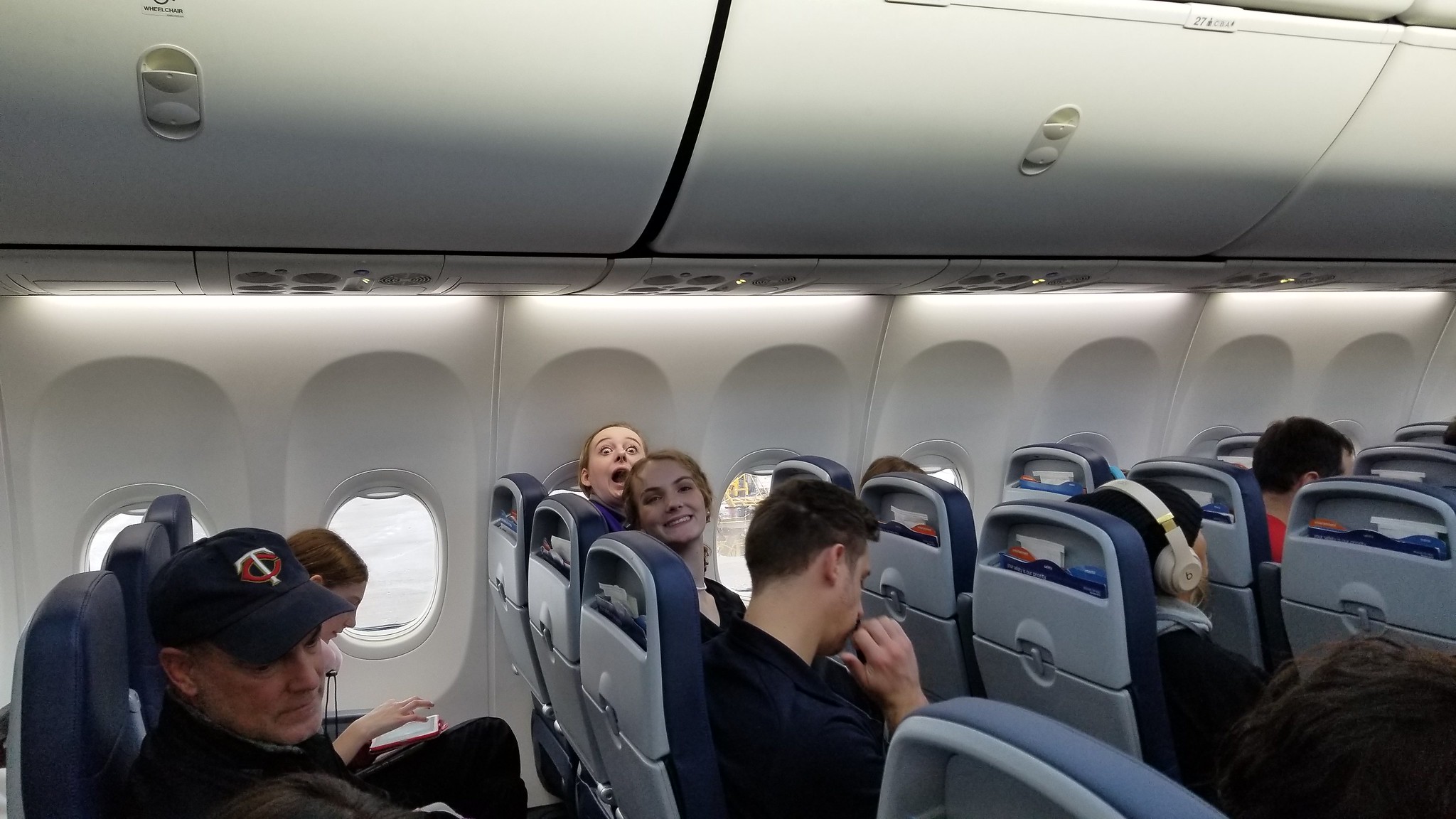 These Two! Took a little bit to warm up to each other but this flight helped them find their friendship again. 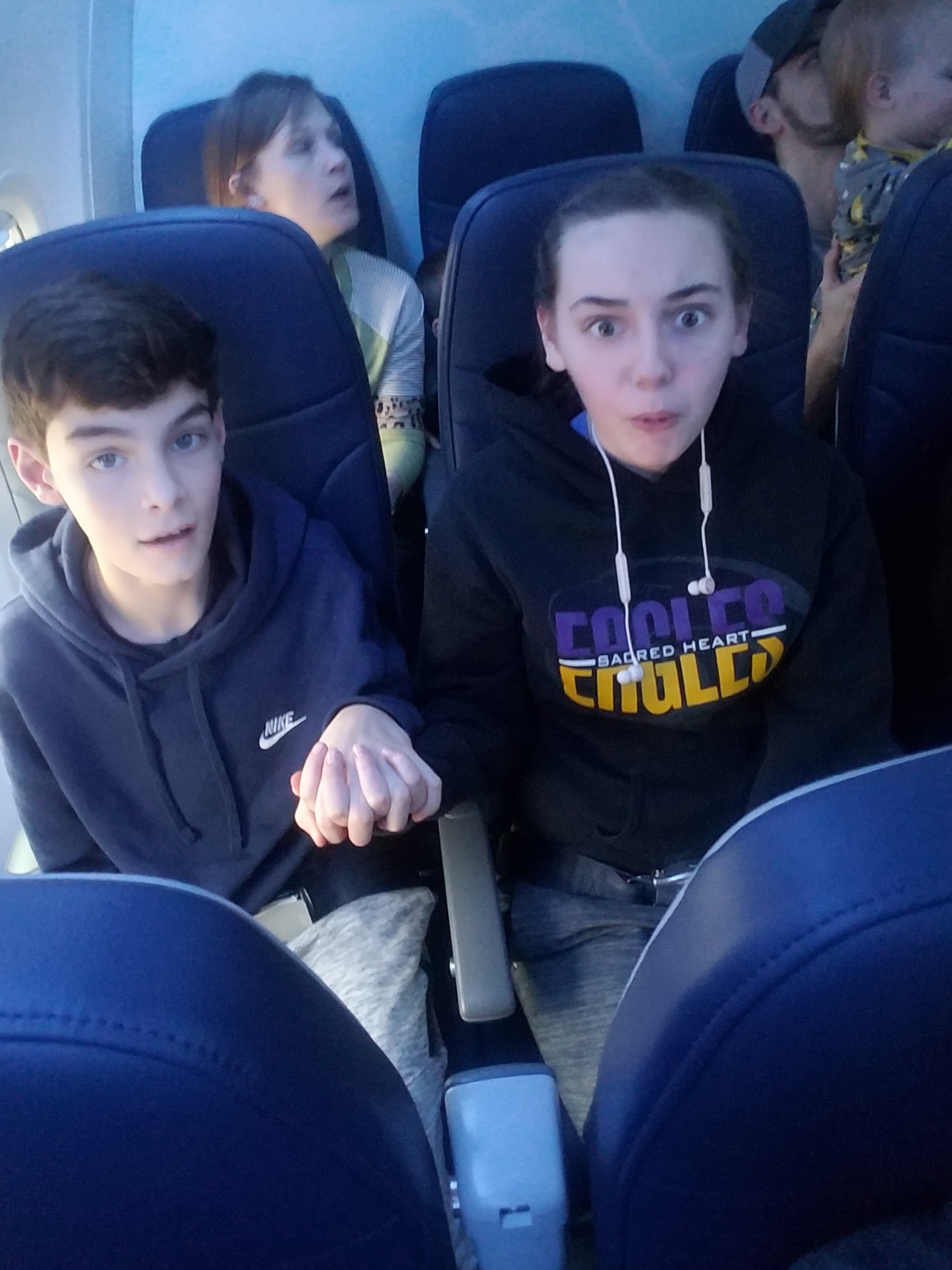 So we land and had a first ever. We stop at the gate, seat belt sign goes off, everyone gets up and starts grabbing their luggage…which I want to divert on something with Sun Country. They CHARGE for overhead luggage but I never see anyone really checking to see if they have indeed paid to put their luggage in the overhead compartment so I’d be curious if people get away with this. If anyone has experience with this, let me know. ANYWAY, everyone grabs their luggage and they come over the speaker, they stopped at the wrong mark at the gate. They had us put everything back and buckle up. They attached the tug, pulled us forward maybe 5 feet and then the seat belt sign turned off again.

Chris has a friend who lives in Miami and wanted to visit with them quick. His friend met him and Linda at the airport and the rest of us grab the bags from luggage claim and found our transportation we reserved. It was really nice actually. When we got to Miami I got a text with a link and I verified I was at the airport and then it said to click when we have all our bags. So I did that and proceeded to the door it told me to go to. I checked in with the people at the kiosk. I didn’t realize the little app told me which van number I was looking for, I only noticed it once we were in the van so that is nice….if you notice it. We booked SuperShuttle and it worked really slick as van took all of us plus bags. We were at our hotel in Ft. Lauderdale in about 40 minutes.

We stayed at Extended Stay Fort Lauderdale – Convention Center – Cruise Port. Not sure where this “convention center” was but whatever. I was not impressed. One person in charge of the desk at check-in on a busy Saturday when people are going to and from the port. ONE! The only other person working was some guy who helped with luggage but he left probably within an hour of us being there. ONE person the whole night!  Plus the lobby was really small. So we waited and waited and thankfully there was a funny Catholic guy also waiting with us from Illinois, actually from St. Louis but on the Illinois side. He kept talking about how he was going to miss 5 pm mass. Of course I get to the counter and it takes me all of 5 minutes to do what I have to do. We grab all our stuff including the Auger’s bags and kids and head to our room. It is a large room which we reserved with kitchenette, pull out, and a king sized bed. Everything was very dated however.

In the mean time, while I was waiting in line and the remaining 7 of us with all our bags waited in the small lobby were figuring out where to eat. They found Duffy’s Sports Grill which was within walking distance of the hotel. If any of you have followed me before, you’d know I have had the worst luck with restaurants anytime I am in Florida. Finally this was the exception! I wouldn’t say it was exceptional service but it was good. Of course by this time it is around 3pm and none of us have had anything to eat so we are all starving. The food was really good plus the college playoff games were on TV so we were all enjoying ourselves. 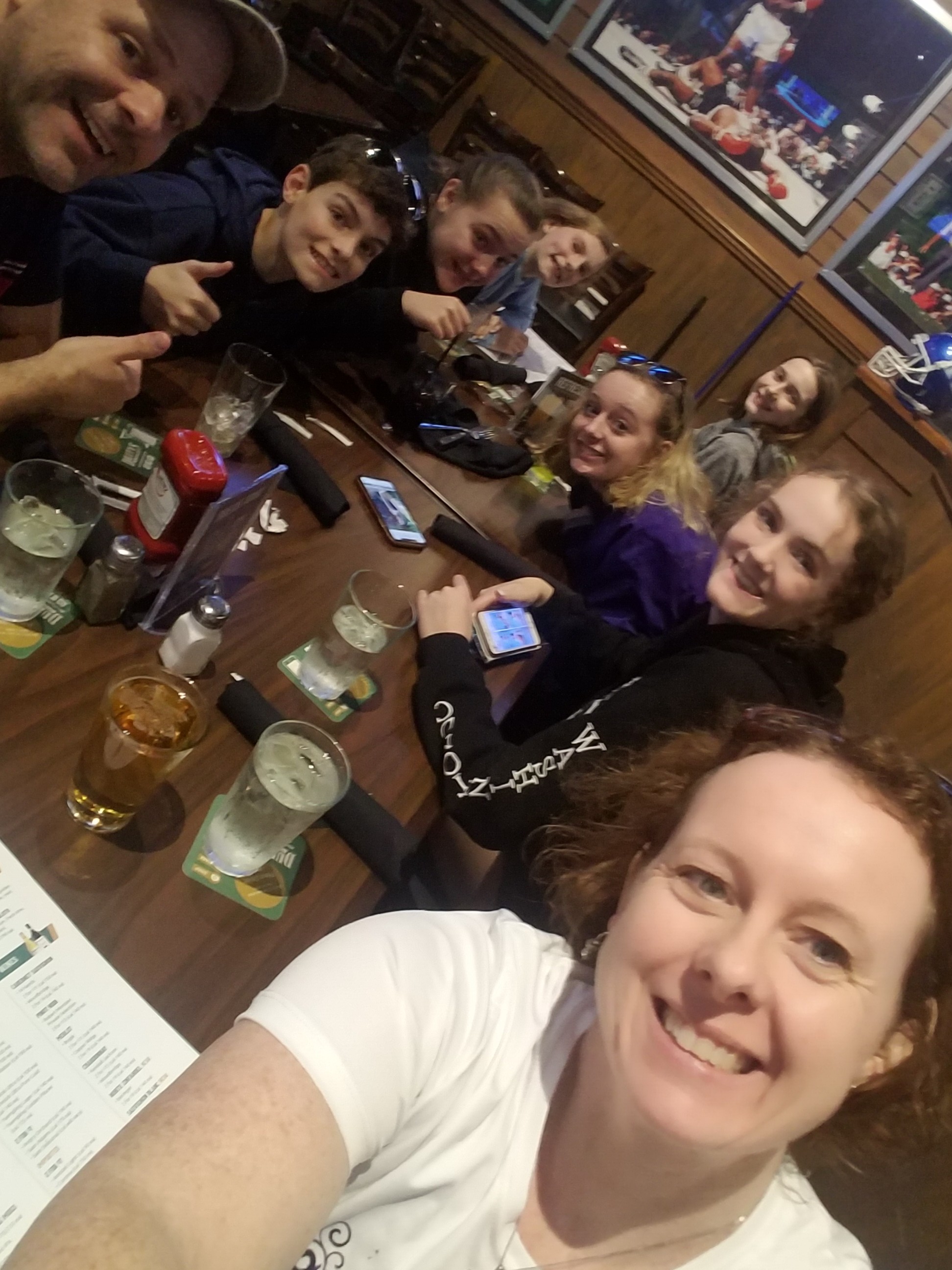 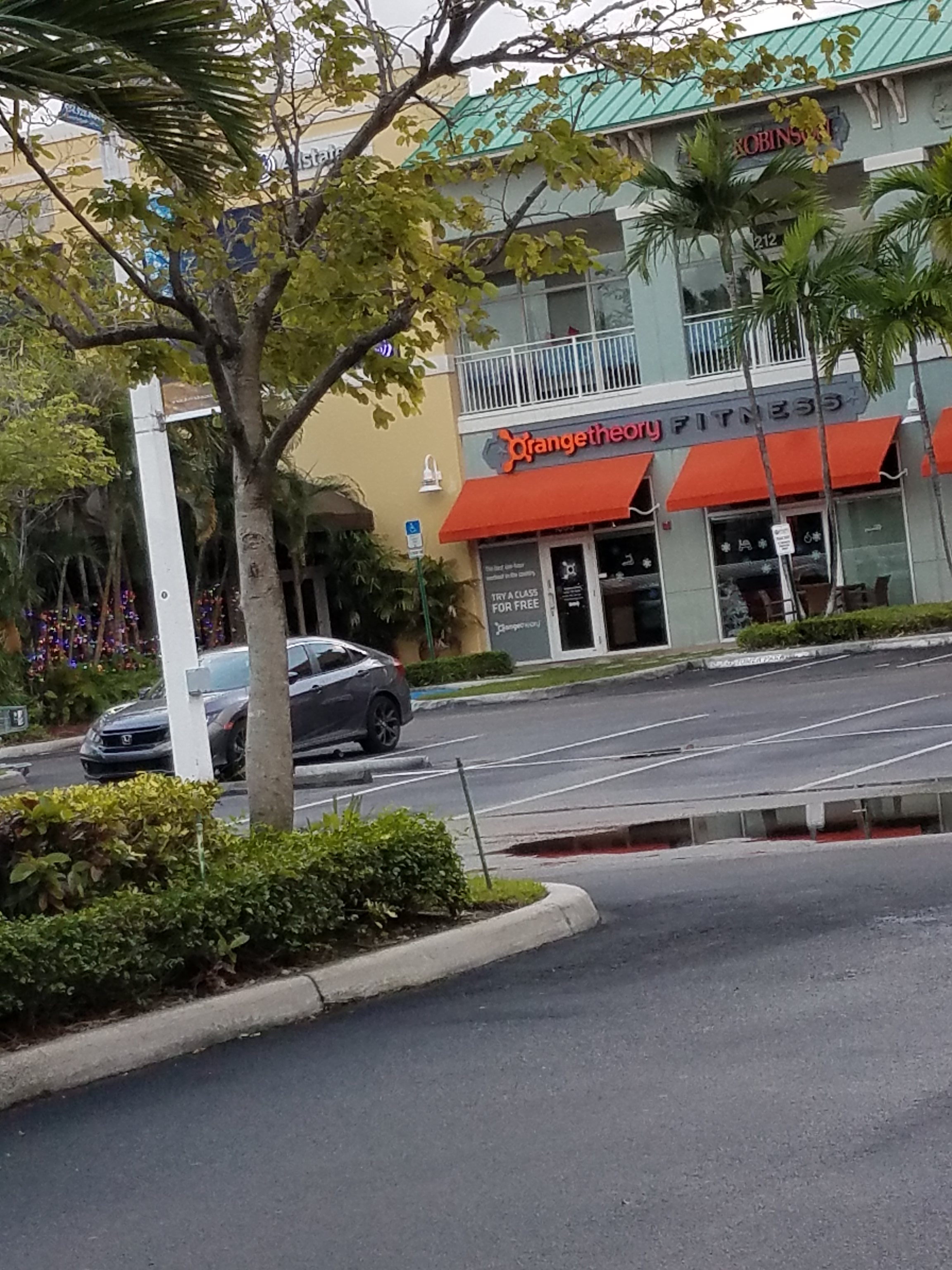 Chris and Linda Ubered to the hotel, checked in and found where we were eating about the time we were finishing up. Turns out, the hotel gave away the room they paid for which was supposed to be exactly like ours. The first one only had was only one double bed. The next one they were given had 2 doubles and she told them they could have a rollaway.

There was also a Publix within walking distance so we got some soda to bring on board (Carnival allows one 12oz – 12 pack per person) and some snacks. Carnival also allows 1 bottle of champagne or wine to bring on as well. We headed back to the hotel, Chris requested some money back for not getting the room they paid for. I stood in line for something else and there was a lady who was checking in, didn’t speak hardly any English and then needed help with all her bags. The lone lady (same lady) said she could help when she is done with everyone else. The customer brought somebody on her cell phone to help translate. I mean this poor gal behind the counter.  Auger’s still hadn’t gotten their rollaway after a while so Chris offered to go get it. She said it was in a different room on the top floor and she would have to get it. Still never came so he went again this time he followed her to whatever room it was in and Chris rolled it down himself. We watched the college game and went back to our room. Turns out, our pullout didn’t have bedding so I went downstairs. Again this lady had to go to a room on the top floor when she had time and get it. It didn’t take her long but she didn’t come back with completely everything but we made it work.

Our hotel from outside…

Heather and I tried to figure out where this “grab and go” breakfast might take place. We determined either it would be in the laundry room and they would give us a token for the vending machine, or the employee break room and we were to just rummage through the refrigerator and take what we want. We also determined what it really meant was we would get granola bars and coffee.  Turns out that’s exactly what it was as this little coffee table in the small lobby opened up. There might have been a muffin or two along with the granola bars. That was the “grab and go” breakfast. OH, and by the way, the same lady WAS STILL WORKING THERE! I asked her if she had been here all night she said groggily, “uh…I went home for a few hours.”

The next morning we walked to Einstein Coffee and Bagels for breakfast because the “grab and go” wouldn’t cut it. They kept shouting names and I think Linda’s name was called even when she had everything.

So when we checked in the night before I reserved transporation to go to the port. There was room for 7 of us at 10:15 and three at 11am for $8/person. I booked those two slots but then we decided that the remaining 3 would just take an Uber at 10:15 along with the remaining 7 who would be in the van, so Linda booked that the night before. Heather goes to pay and because we had kids, they only charged us for like 3 people which was great!

When checking out, there were more people behind the desk finally and one asked me how it was. I said, “oh…it was OK.” She said, “Just OK, was there something wrong.” I said, “Well this poor girl had been really busy yesterday working all by herself, I felt sorry for her.” To which the other lady says, “Well that’s how it goes I was working when it was really busy the other night and it was just me.” Really? Wow that makes me feel better. That was a dumb answer because that’s NOT how a hotel should be ran. One person from 3 o’clock on? On a Saturday? Plus she is still there the next morning? This lady’s poor excuse only proved the point that it is always this way and that is just poor management! Wouldn’t recommend staying here even though it was really close to the port. There are plenty of other options.

Up Next: Carnival Magic – Day 1 – Embarkation